Four men have been hit by bricks while one is battling a bullet wound in a private hospital.

Gunfire broke out, injuring one, while several others were injured as bricks were hurled as two groups clashed following a fight between children during a cricket match, at Jarcha, Greater NOIDA, on Wednesday morning, as per a DNA report. The police have identified the injured as Mohammad Rizwan (who received a bullet injury), Naseem, Mohammad Arif, Waqil Khan and Umar Khan. Rizwan was admitted to a private hospital, and is still critical.

“We received a police control room call about firing and stone pelting in the area at 7 am in Kalonda village. The fight started when children belonging to the village were playing a cricket match,” said Krishan Kumar Rana, station house officer, Jarcha police station.

“Prima facie, it appears that the fight was to show superiority as after firing both the groups then assaulted each other with bricks and sticks. Based on the complaint filed by Mohammad Intezar, Rizwan’s uncle, we have booked five persons under relevant sections of the Indian Penal Code,” said Rana. “We have formed teams to nab the accused as they are currently absconding.”

The accused have been charged under sections 307 (attempt to murder) and 147, 148 and 149 (rioting, rioting with deadly weapon and unlawful assembly) of the Indian penal code.

During the match in question, a quarrel broke out between Iliyas, resident of Kalonda, and Mohammad Abbas. This led to an altercation where both parties involved stones and bricks and unleashed country-made pistols. 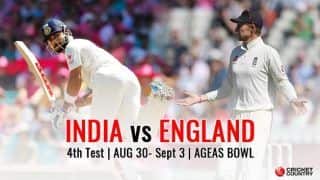