For the second successive match, Zimbabwe captain Brendan Taylor hit an unbeaten century and finished on the losing side as New Zealand won the second One-Day International by four wickets at Harare Sports Club on Saturday. 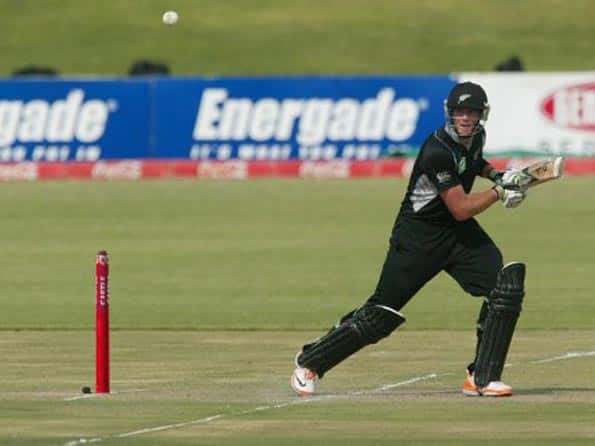 For the second successive match, Zimbabwe captain Brendan Taylor hit an unbeaten century and finished on the losing side as New Zealand won the second One-Day International by four wickets at Harare Sports Club on Saturday.

But in-form Martin Guptill hit a century of his own to secure victory for New Zealand.

Guptill, who made a hundred on debut against the West Indies in Auckland in January 2009, notched his second century in his 54th match.

He made 105 off 121 balls and shared a second-wicket stand of 157 with Brendon McCullum which put New Zealand on course for an easy win before three wickets fell in quick succession to give the tourists some anxious moments.

McCullum struck 87 off 99 balls but was dropped four times, including a chance before he had scored.

McCullum, skipper Ross Taylor and Guptill were out within the space of 27 balls, bringing together two new batsmen in Kane Williamson and BJ Watling with 38 still needed off 47 balls.

Watling was run out with seven still needed and James Franklin was out for one before Jacob Oram hit the winning runs with ten balls to spare.

“We stuttered at the end,” said Ross Taylor. “We always had it under control but we would have liked to finish it a bit more professionally.”

Brendan Taylor followed up his 128 not out in the first match at the same ground on Thursday, when New Zealand won by nine wickets, with another impressive innings, again having to battle through a difficult early period when the seam bowlers received some assistance from the pitch.

“It was a slightly better (team) performance,” said the Zimbabwe skipper.

“Whatever total you posted, with the wicket flattening out it was always going to be hard to defend.”

Zimbabwe struggled against lively bowling from left-armer Andy McKay and the tall Oram and limped to 88 for four in the 25th over.

Taylor then found an aggressive partner in Malcolm Waller, who hit 42 during a fifth wicket stand of 86 off 73 balls as the conditions became easier for batsmen.

Elton Chigumbura (14) and Keegan Meth (20) helped Taylor in partnerships of 40 for the sixth wicket and 29 for the seventh wicket.

Taylor was on 98 when Prosper Utseya was dismissed by Oram off the first ball of the last over but Ray Price was able to feed the strike to his captain.

Taylor hit the third ball of the over to fine leg to become the first Zimbabwean to hit back-to-back centuries.

McKay achieved his best figures in one-day internationals, taking four for 53, while Oram took three for 48, which included 14 off his final over. (AFP)