New Zealand romped to a clinical 10-wicket victory against Zimbabwe in the World Cup on Friday, boosting their chances of making it to the quarter-finals. 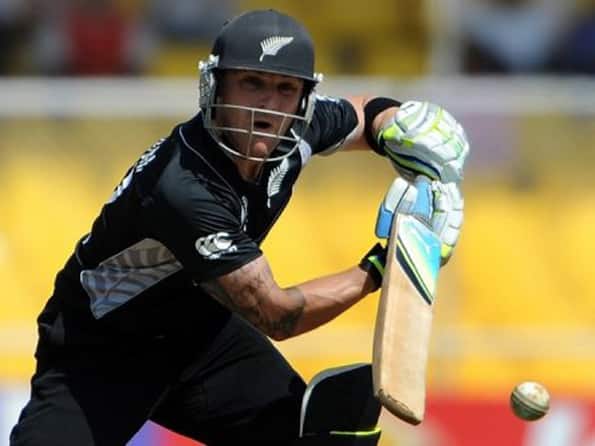 New Zealand romped to a clinical 10-wicket victory against Zimbabwe in the World Cup on Friday, boosting their chances of making it to the quarter-finals. After bowling out the African nation for just 162, the Kiwis rode on unbeaten half-centuries by Martin Guptill and Brendon McCullum to canter to the target with 99 balls to spare in the Group A clash at the Sardar Patel Stadium.

The opening partnership between Guptill (86) and McCullum (76) was the highest for the tournament. The victory, the second for New Zealand by a 10-wicket margin in the tournament, moved them up in the table with four points from three games. Pakistan lead the charts with three wins from as many matches.

Guptill, named man of the match, launched New Zealand’s chase with a bang, carting seven fours and two sixes off 108 balls on way to his 10th ODI half-century.

McCullum was equally belligerent, hitting six fours and two sixes in his 95-ball knock. “It was a good partnership. It was definitely made a lot easier by the way we bowled. I thought we were outstanding with the ball. A win like this is very good for confidence,” he said.

New Zealand skipper Daniel Vettori said the win was a much-needed confidence boost. “I think it’s the performance that we were looking for. Now we’ve got to replicate that against some of the bigger nations,” he said.

Zimbabwe captain Elton Chigumbura cut a sorry figure as he tried to explain his team’s capitulation. “It was a very disappointing game from us from ball one up to the end. Losing quick wickets is a problem. It’s a game we will like to forget quickly and move onto the next one,” Chigumbura said.

Earlier, seamers Tim Southee, Kyle Mills and Scott Styris shared six wickets after Chigumbura won the toss and elected to bat on a benign wicket. But it was not a start they would have wished for, losing their top five batsmen inside 15 overs to a combination of Kiwi pace and spin.

Opener Charles Coventry was the first to go, run out with just two runs on the board as Hamish Bennett at mid-on threw the stumps down at the bowler’s end. Tatenda Taibu, coming into the game on the back of a match-winning 98 against Canada, earned a reprieve when Vettori failed to pouch a sitter off Southee.

But the bowler was rewarded off the very next ball when he had Taibu trapped leg before wicket for eight, a decision upheld after television replays showed Southee’s ball would have hit the off-stump.

Mills, back in action after missing his team’s seven-wicket defeat to Australia, sent back Craig Ervine for 11 before Vettori dismissed Chigumbura and Regis Chakabva in his first over to leave Zimbabwe in deep trouble at 46 for five.

Opener Brendan Taylor (44) waged a lonely battle until he was struck on the pads against the gentle pace of part-timer Styris to be dismissed six runs short of a deserved half-century. Greg Lamb was the second run-out victim of the game, failing to make his ground after being sent back by partner Prosper Utseya (36).