Gurunath Meiyappan arrested by Mumbai Police for betting in IPL

Gurunath Meiyappan arrested by Mumbai Police for betting in IPL

Gurunath Meiyappan, son-in-law of N Srinivasan has been arrested by Mumbai Police late night on Friday for his alleged involvement in betting on Indian Premier League (IPL) matches. 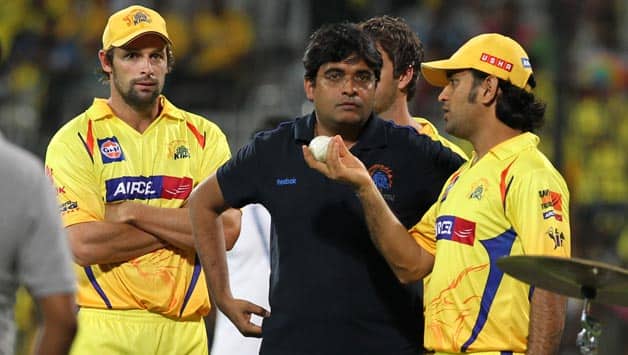 Gurunath Meiyappan, son-in-law of BCCI President N Srinivasan and owner of Chennai Super Kings, was arrested late night on Friday for his alleged involvment in betting on IPL matches, raising questions over the future of the franchise.

“We have interrogated Gurunath based on information we have. We have found his involvement in the offence related to IPL betting case. We have placed him under arrest”, Joint Commissioner (Crime) of Mumbai Police Himanshu Roy told reporters.

The 35-year-old Meiyappan was summoned by Mumbai Police for questioning after actor Vindoo Dara Singh implicated him in betting.

Gurunath flew to Mumbai by a chartered aircraft from Madurai a little after missing the 5 pm deadline set by police for questioning. Gurunath reached Mumbai late in the evening accompanied by noted Chennai lawyer P S Raman.

He was taken from the Mumbai airport to the Crime Branch headquarters and subjected to interrogation before being arrested.

Gurunath was arrested after nearly three hours of questioning that began at 9.30 pm, Roy said adding he will be produced before a metropolitan court on Saturday.

The honcho of CSK, twice IPL champions, Gurunath, was in the eye of a huge storm after actor and TV reality show winner Vindoo Dara Singh admitted to having placed bets on his behalf.

Vindoo, winner of reality show Bigg Boss season 3 and son of late wrestler-actor Dara Singh, was allegedly in “frequent touch” with Meiyappan during the IPL matches and was claimed to have told Mumbai crime branch that the CSK owner had lost Rs 1 crore through betting.

The crime branch, according to sources, had call data records of conversations between Vindoo and Meiyappan and they were learnt to have confronted the two with the transcripts.

Though Roy did not say during his post-arrest media briefing about whether Meiyappan was also involved in spot-fixing of IPL matches, he had earlier said strong suspicions did exist.

“We suspect Meiyappan gave inside information to arrested actor Vindoo Randhawa who passed on those to the bookies,” Roy had told reporters ahead of Meiyappan’s questioning.

With Meiyappan’s arrest, the pressure on Srinivasan for his resignation is set to mount further as several of his rivals in the cricket establishment have already started gunning for him.

Vindoo, whose police remand on Friday was extended by a metropolitan court till May 28 following crime branch’s request so that he could be confronted with Meiyappan, alleged to have placed bets through absconding bookies Jupiter, Pavan Jaipur and Sanjay Jaipur. Vindoo himself also used to accept bets from others and forwarded them to these men.

The actor, who has emerged as a key figure in the betting scandal, according to crime branch, had facilitated the escape of Pawan and Sanjay to Dubai as the bookies faced the heat following unravelling of the spot-fixing scam by Delhi Police with the arrest of three Rajasthan Royals players including India speedster S Sreesanth.

He is also alleged to have sent a parcel to controversial Pakistani umpire Asad Rauf on behalf of bookie Pawan Jaipur, which is yet to be traced by the crime branch.