Gurunath Meiyappan, N Srinivasan and Raj Kundra have been named in the Justice Mudgal Commitee report submitted to Supreme Court on Friday. The next hearing is set to take place on Nov 24.

According to Times Now, these three names have been revealed to SC by now from a overall 13 names in the list. IPL COO Sundar Raman was reportedly named.

The panel, headed by former judge Mukul Mudgal and including ex-India captain Sourav Ganguly, in February presented a sealed envelope to the court containing names of 13 individuals who needed to be investigated further, reported AFP.

The apex court had announced on November 3, after the submission of the Justice Mukul Mudgal Committee reports, that it has adjourned the hearing on the matter till Friday, November 14. 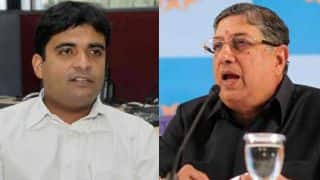