Needing 280 to win, Zimbabwe lost Chamu Chibhabha and Sikandar Raza very early in the match. However, Masakadza and Taylor’s partnership made sure Zimbabwe were well settled. After completing his half-century, Taylor was removed by Tillakaratne Dilshan, who did not come out to bat during the Sri Lankan innings. ICC Cricket World Cup 2015: SCHEDULE & MATCH DETAILS

Earlier, Sri Lankan captain Angelo Mathews won the toss and elected to bat. The South Asian team were off to a shaky start, as they lost Kumar Sangakkara in the third over. Lahiru Thirimanne and Mahela Jayawardene built a 62-run partnership, but both the batsmen departed after scoring 30 each.

For Zimbabwe, Sean Williams picked up three wickets. Zimbabwe used nine bowlers too. However, Williams was the only bowler to complete the 10 overs quota. Catch the live blog of the match here

The win will surely boost Zimbabwe, who have been slotted with India, Ireland, Pakistan, South Africa, United Arab Emirates (UAE) and West Indies. 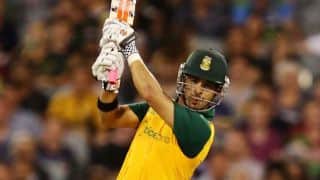