Zimbabwe beat Afghanistan by seven wickets to register their maiden T20I win over the Asian side.

Hamilton Masakadza, playing his farewell match, came to the party, smashing 71 off 42 balls, as Zimbabwe registered their maiden T20I win over Afghanistan at the Zahur Ahmed Chowdhury Stadium in Chattogram on Friday.

Chasing 156 to win, Zimbabwe were off to a brisk start as skipper Masakadza and Brendan Taylor put up a 40-run stand for the opening wicket. Regis Chakabva joined Masakadza after Taylor’s fall and the two added 70 runs for the second wicket before Masakadza perished for 71 in the 13th over off Dawlat Zadran.

The right-hander hit four fours and five sixes as he also registered highest score by a batsman in his farewell T20I match.

Zimbabwe chased down the remainder of the 46 runs without much trouble and went on to end Afghanistan’s 12-match winning streak in the shortest format of the game.

Earlier, batting first, the Rashid Khan-led unit set the ball rolling with an aggressive 83-run stand between their openers – Rahmanullah Gurbaz and Hazratullah Zazai. While the former went on to score 61 off 47 balls, the latter scored 31 off 24 balls.

However, Afghanistan failed to capitalise on the start and lost the plot in the middle overs. The Asian side, who were looking to set for a big total, having reached 107/1 from 12.5 overs, lost four wickets for 18 runs as pacer Chris Mpofu scalped four wickets to restrict Afghanistan to 155/8 at the end of 20 overs.

Afghanistan, though, have already made it to the final and will face the hosts Bangladesh in the summit clash on September 24 at the Shere Bangla National Stadium in Dhaka. 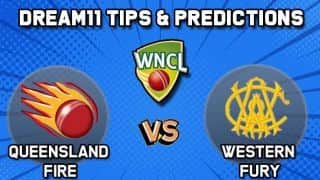