Hamilton Masakadza scored a 111 ball 110, as Zimbabwe scored a challenging total of 248 against Afghanistan in the fifth ODI at Sharjah.

Zimbabwe‘s veteran batsman Hamilton Masakadza scored a 111 ball 110, as Zimbabwe scored a challenging total of 248 against Afghanistan in the fifth and final One-Day International (ODI) at the Sharjah Cricket Association Stadium on Wednesday. It was Masakadza’s first ODI ton in five and a half years, while Afghanistan’s Amir Hamza claimed three for 41. Earlier, Zimbabwe skipper Elton Chigumbura won the toss and elected to bat first, as they moved in with an unchanged squad, while Afghanistan skipper Asghar Stanikzai made a couple of changes in the form of Nawroz Mangal and Gulbadin Naib, coming in for Sadiq and Shafiqullah. LIVE CRICKET SCORECARD: Afghanistan vs Zimbabwe, Live Score, 5th ODI match

Zimbabwe began their innings on a shaky not, losing opener Chamu Chibhabha for a mere single in the third over to Amir Hamza, who trapped him leg-before. However, Afghanistan’s dream start seemed to be live short as it was the pair of Peter Moor and Hamilton Masakadza that put up a 101-run stand for the second wicket, before Moor fell for a healthy 42 to Mirwais Ashraf. LIVE CRICKET UPDATES: Afghanistan vs Zimbabwe 2015-16, 5th ODI at Sharjah

Masakadza continue as he brought up his half-century, and along with Richmond Mutumbani, he added 65 more runs before Mutumabani fell in the 36th over for a healthy 40 at the score of 167, while Masakadza continued to bat on. Out came Elton Chigumbura, but could only contribute mere three runs as the partnership was worth just nine, and he was dismissed in the 40th over.

It was then the turn of Sikandae Raza, who along with Masakadza added a handful and all-important 44-run stand, before he was dismissed in the 46th over by Rashid Khan for 29. However, he had the privilege to see Masakadza scoring his fourth ODI ton, that off 104 deliveries, including nine boundaries and three sixes, along with a strike rate of 96.19.

Raza was soon followed by Malcolm Waller, who was dismissed the very next over for an unfortunate duck by Dawlat Zadran, followed by Masakadza the next over, who fell for an impressive 110, after being dismissed by Rashid Khan, as the score read 232. However, in an interesting situation towards the end, Luke Jongwe was dismissed for a mere couple in the 49th over off a delivery that he hit into the crowd for six, but had stepped onto the stumps, causing him to be dismissed for a hit-wicket.

The very next over saw the diusmissal of a typical tail-ender in the form of Neville Madziva for a mere couple, after being stumped by Mohammad Shahzad off Amir Hamza, and soon to follow him was Graemer Cremer for just 12 in the same over as Zimbabwe were bowled out for a challenging total of 248. 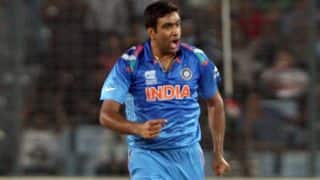