Masakadza went on to make new records with his feat of his as he became the highest run-getter for Zimababwe in T20Is.

Hamilton Masakadza played a remarkable knock of 93 off 58 as he helped Zimbabwe cruise to a good 180-run total against Bangladesh in the fourth Twenty20 International (T20I) at Khulna. Hamilton has been in runs in the series and the previous one and is regarded as one of the most impactful players in the Zimababwe squad currently. The cricketer proved his potential as he went on to make new records with his feat of his as he became the highest run-getter for Zimababwe in T20Is, breaking his own previous record. LIVE CRICKET SCORECARD: Bangladesh vs Zimbabwe, 4th T20I at Khulna

Zimbabwe, winning the toss, chose to bat first. The visitors got an early blow as their opener and star performer from last match, Vusi Sibanda, was dismissed for a mere 4. Hamilton Masakadza and Richmond Mutumbami took things forward from that position and in a very appreciable way. The partnership added 80 runs before Mutumbami left for a 25-ball 32. Masakadza stayed at the crease and took his team to yet another competitive total. He found the right partner in Malcolm Waller who kept on providing the right support that Masakadza was looking for. LIVE UPDATES: Bangaldesh vs Zimbabwe 2015-16, 4th T20I at Khulna

Bangladesh looked in deep trouble while Taskin Ahmed came to the rescue. Taskin’s beautiful yorker found its way through Waller’s bat and pad and hit straight to the mid-wicket. Malcolm Waller departed making 36 off 24 while Sikandar Raza soon followed him with a couple of runs. The wicket was of great importance to Shakib Al Hasan as it was his 50th T20I wicket.

Hamilton carried his bat through the innings and scored 93 off 58, which is the highest score by any Zimbabwe player in a T20I match. The previous record was held by himself only as he had scored 79 against Bangladesh in the first match of the current series. Bangladesh bowlers looked helpful in front of him. Amongst the Bangladesh bowlers, it was a team effort as Mashrafe Mortaza, Abu Hider, Taskin Ahmed and Shakib Al Hasan all picked up a wicket each, while Abu Hider provided them with the first breakthrough. 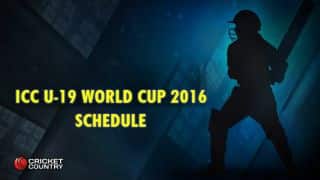