Jimmy Hansra struck a fine half-century under pressure as Canada defeated Kenya by five wickets on Monday to register only their second victory ever in a World Cup. 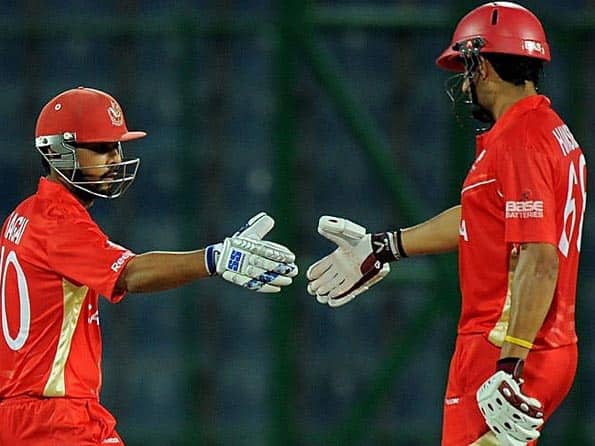 Canada cricket captain Ashish Bagai (L) shakes hands with teammate Jimmy Hansra after completing a 100-run partnership as they play against Kenya during their Cricket World Cup match at the Feroz Shah Kotla Stadium in New Delhi. Hansra struck a fine half-century under pressure as Canada defeated Kenya by five wickets on Monday to register only their second victory ever in a World Cup.

Jimmy Hansra struck a fine half-century under pressure as Canada defeated Kenya by five wickets on Monday to register only their second victory ever in a World Cup. Hansra hit seven fours and two sixes in his knock of 70, his best in 11 one-day internationals, to help Canada overhaul Kenya’s 198 with 27 balls to spare in the day-night clash at the Feroz Shah Kotla stadium.

The Indian-born Hansra, who came in to bat with the team reeling at 48-3, put on 132 for the fourth wicket with his captain Ashish Bagai to ensure the efforts of fast bowler Henry Osinde (4-26) did not go to waste. Bagai remained unbeaten on 64 off 97 balls with seven fours.

“I was disappointed in myself and my team over the last three or four games so it was good to get some runs under the belt. Jimmy played a fantastic knock with me and both of us did a great job to get us over the line,” said Bagai.

“We were fortunate to have no run-rate pressure really. It was four runs an over and we got a decent start and kept up with the run rate right the way through.”

Disappointed Kenyan skipper Jimmy Kamande said: “We started off very, very badly and I thought it was a good recovery.” He added that at one stage he thought they could post 220 or 230, which would have been defendable.

Canada’s previous World Cup win came against Bangladesh in the 2003 World Cup at Durban. The result had little bearing on the quarter-final hopes of either teams, languishing at the bottom of the Group A table.

Canada’s chase began in a dramatic fashion with opener Rizwan Cheema being ruled leg before wicket off the second ball of the first over but the batsman asked for a review and the decision was overturned.

Cheema though did not last long as he was bowled by Elijah Otieno after carting the paceman for a six and a four in the same over. Zubin Sarkari was run out by a direct throw from Kamande and opener Ruvindu Gunasekera was stumped off the bowling of off-spinner James Ngoche.

Ngoche could have picked up a second wicket in the same over when Hansra hit straight to mid-on but Seren Waters dropped a sitter, a mistake that was to cost the Kenyans.

Earlier, Osinde picked up three wickets in his opening spell to help reduce Kenya to 57-5 by the 15th over before a fightback by Tanmay Mishra and Thomas Odoyo. Mishra hit a composed 73-ball 51 for his fourth half-century in one-day internationals and Odoyo also chipped in with 51, containing five fours and a six.

Osinde struck early for Canada, removing opener Morris Ouma off the second ball of the innings and his partner Waters in the fifth over. The paceman then sent back David Obuya to grab his third wicket before Harvir Baidwan brought an end to a promising knock by Collins Obuya (31).

Veteran Steve Tikolo (12) was given out lbw. Kamande sought to rebuild the innings with Mishra, putting on 52 runs for the sixth wicket but portly leg-spinner Balaji Rao had him caught behind for 22. Mishra’s dogged fightback came to an end when he holed out tamely to Surkari off part-timer John Davison in the 43rd over.