Kenya captain Jimmy Kamande was left struggling for answers after a 10-wicket World Cup mauling at the hands of New Zealand nudged them closer to exile from cricket's most exclusive club. 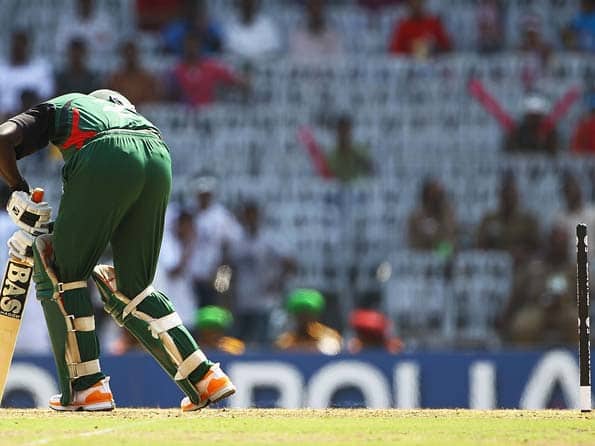 Kenya captain Jimmy Kamande was left struggling for answers after a 10-wicket World Cup mauling at the hands of New Zealand nudged them closer to exile from cricket’s most exclusive club.

Sunday’s match, which was supposed to last 100 overs, was over in less than 32 as the Black Caps dismissed Kenya for 69 before racing to their target off just 48 balls at the Chidambaram Stadium.

It was Kenya’s lowest World Cup total and the fifth worst in tournament history.

Their capitulation came at the worst possible time for the sport’s second-tier nations with the International Cricket Council determined to have a 10-nation World Cup, instead of the current 14 teams, in four years’ time.

“The disappointing thing is we get to play a Test team once around every two years or so. The more we play against these guys, the better you become. We play Pakistan next. I would be happy as long as we improve each and every game.”

Kamande said he would not blame his players for unravelling at the big stage. “We didn’t express ourselves. The young boys were nervous. The two young lads who opened (Seren Waters and Alex Obanda) were a bit nervous.

“Collins Obuya (14) was positive and we were gaining momentum but quick wickets in the middle set us back. In the next few games, we will express ourselves. The good thing is that this is done. It’s out of the way.”

Kenya got off to a dismal start after electing to bat, losing five wickets inside the first 16 overs with paceman Hamish Bennett doing the bulk of the damage.

“It was not as if the ball was doing much but the lines and lengths were tight,” said Kamande. “Some of our batsmen played too much across the line. We will go back and work on it. Next game, different opposition and it will be a different approach from us.”

Kenya, semi-finalists of the 2003 edition, take on Pakistan in their second game in Hambantota, Sri Lanka, on February 23.

How not to make friends & not influence people!