Duncan Fletcher had his ups and downs with India as he took the team to ICC Champions Trophy 2013 victory on English soil and saw India reach the semi-finals of ICC World Cup 2015, held in Australia and New Zealand.

Born on September 27 1948, former Zimbabwe player Duncan Fletcher was born. Fletcher was the assigned  coach of the England from  a period of 1999 to 2007 which saw the resurgence of the England especially in the Test arena in  early phase of the 2000s.  The former left-handed batsman and right-arm fast bowler debuted for his national side, Zimbabwe, on June 9, 1983 versus Australia in limited-overs format. Interestingly, all his One-Day International (ODI) appearances came in the 1983 World Cup which gave India their first major title. He has an average of 47.75 with two half-centuries under his belt. Fletcher was also the coach of Indian cricket team from 2011-2015.

Under Fletcher’s tenure, England raised their game to new heights, especially int he longer format. Some of England’s major achievements under Fletcher were their famous away series victories in Sri Lanka, Pakistan, West Indies and South Africa between 2000-2004. In 2004 England gained an English record 8 consecutive Test wins, beating New Zealand 3-0 and West Indies 4-0 at home respectively before claiming the first test in their tour to South Africa. However, apart from these wins, Fletcher’s most cherished feat came when he guided English to an Ashes series win after 18 years when the hosts secured a 2-1 victory over Australia in 2005. ALSO READ: World Cup 1983: Duncan Fletcher’s heroics and Zimbabwe’s first win over Australia

Fletcher was also named India’s head coach after Gary Kirsten’s departure from the post post India’s second World Cup win in ICC World Cup 2011. It was Kirsten who recommended Fletcher’s name for his astute knowledge of the game and commendable record in transpiring an English side. Fletcher had his ups and downs with India as he took the team to ICC Champions Trophy 2013 victory on English soil and saw India reach the semi-finals of ICC World Cup 2015, held in Australia and New Zealand. ALSO READ: Sunil Gavaskar: Work ethic under Duncan Fletcher ‘pretty abysmal’

However, Fletcher also earned lots of flak for falling to transform India into a competitive outfit in Tests, played in overseas. It was under his term that India lost two away series each in England and Australia and failed to beat South Africa and New Zealand in their den as well. India also lost their home series against England in 2012 with Fletcher at the helms of things.

On 5 November 2007 Fletcher’s autobiography Behind The Shades was published. He remains a vital figure in coaching arena and is a well respected former cricketer. 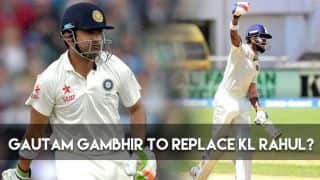