His prowess with the ball on the football field is well-known but on this occasion, Messi takes on the cricketing field and the result is just captivating.

Football star Lionel Messi is inarguably one of the greatest players to have played the game and is widely reckoned for his magical play and technique across the globe. His prowess with the ball on the football field is well-known but on this occasion, Messi takes on the cricketing field and the result is just captivating. Stars and celebrities enjoy massive fan following and are often seen endorsing various brands. On this occasion, Messi was promoting Herbalife. ALSO READ: Virat Kohli, Shikhar Dhawan and other cricketers welcome Anil Kumble as India’s head coach

In the video below, which was posted by Leo Messi Fans Club on YouTube, Messi is seen playing three sports other than football and mastering it. Messi is challenged by a cricketer as he takes the pitch while dressed up in his Barcelona attire. He is asked to bat which he does gracefully and smashed the bowler for a six. ALSO READ: Nick Compton to take an indefinite break from cricket

But the real art is displayed while bowling. When Messi put the hard yards, the batsman smashed him for massive sixes and in order to get rid of him, the elegant footballer does something out of the box. Messi kicks the ball and gets it to turn as the leather rips through the defences and shatter the stumps. The moment was captivating for every Messi fan. READ MORE: Anil Kumble’s appointment as Team India head coach sets Twitter abuzz

Further, he also plays table tennis and basketball and gives the fan a run for their money. Take a look at the video here: 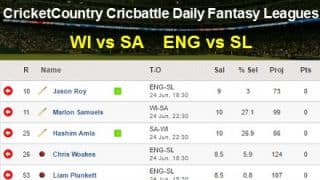