Harbhajan had a series of ideas and suggestions which he shared before the start of a new season in the Ranji Trophy.

Harbhajan Singh, the Indian off-spinner, who mooted the concept of playing Ranji Trophy on neutral wickets, is backing it to the hilt. The 103-Test veteran has given a series of suggestions to the Board of Control for Cricket (BCCI) in India to improve domestic cricket. He was quite vocal in stating that there is no point in playing on doctored wickets in domestic circuit as domestic games are mean to produce champion players for the nation who can play well abroad as well. He stressed on the point of neutral venues in the domestic level as this would lead to increasing the competition among teams. ALSO READ: BCCI contemplate mini IPL in September 2016

According to cricbuzz.com, he stated, “Earlier, I was only playing international cricket, and had little idea about the issues in domestic cricket. However, the experience of doing so for the last four-five years has given me a fair idea of what needs to be done to improve it,” Harbhajan told before adding: “I have given my suggestions in this regard to the concerned people in the Board. I won’t be able to attend the conclave due to personal commitments (he is on the verge of becoming a father), but my views will be put forth by our representative,” said the 35-year-old, who leads Punjab in the Ranji Trophy. ALSO READ:Major shake-up in the television rights for bilateral series awaits

The point of neutral venues for the Ranji Trophy was stressed by him after his experience of playing a match against Tamil Nadu.  He took ten wickets in the game to spin out Tamil Nadu on a rank turner at Dindigul.

Speaking on that match, he said, “It was perhaps the best venue that I have played in domestic cricket. There were around five to six thousand people who turned up to watch that match, and the ground was beautiful, lush green. However, when I saw the wicket before the match, I realised that it was unfit for a first-class game. Any batsman could have been hurt on that. The match finished before lunch on the second day. I did not enjoy taking wickets in that match at all,” he recalled.

Stressing on the sole objective of domestic matches, he added, “It is a real concern. The game should not be about ordinary spinners or bowlers taking wickets. It should be about skill, fighting till the end. Domestic cricket has to be about producing champion players, who can do well in any conditions. Let’s make fair wickets which give a chance to everyone. For this reason, I feel that we can have a system where players from the South play in the North Zone, or say a Punjab team plays at various grounds in Gujarat. There is no point in playing on doctored wickets.”

On whether neutral venues will dent the local interest or not, he replied “Is that more important or is it fine to produce bowlers who will struggle to take wickets abroad, or batsmen who do not know how to construct an innings, because they simply have not batted that long,” he shot back.

Harbhajan expressed his desire to the Board to switch from SG balls to the Duke in domestic cricket. “The SG balls go out of shape pretty early, and you have to change it frequently. The Duke, as I saw in England, retains its shape and does not need to be changed till the new ball is due,” he suggested, before revealing his other ideas.

“All the players in a team must wear the same kit, including the helmet. Right now, you see players using their IPL or India helmets, which isn’t correct. It is first-class cricket after all. In county cricket, all players wear the same gear, from head to toe, and it makes players feel that they are playing for a side. Lastly, the Board must make it mandatory that every domestic team will have a qualified trainer and a physio,” he concluded.

First Published on
Last updated on June 23, 2016 9:07 AM IST
TOPICS:
Harbhajan Singh Ranji Trophy Board of Control for Cricket in India 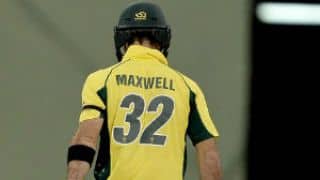 Glenn Maxwell: Being dropped motivated me to train harder