Harbhajan Singh who is currently playing in the IPL for Mumbai Indians (MI), feels India will need to quickly adapt to the conditions in England.

In a column for ICC, Harbhajan said, India is the defending champion, and I sincerely believe that we have the strength, ability and stability to defend our crown. We just need to be at the top of our game. Let’s not forget that this tournament will feature the world’s eight top-ranked teams. So every team is going to fancy its chances. It will come down to the team that holds its nerve on the day. If you ask me to stick my neck out and predict the winner, I will happily say India. Yes, I believe this team can defend the title it won in 2013.

Harbhajan stressed on the fact that Champions Trophy helps players prepare better for World Cup. This year, the ICC Champions Trophy assumes extra significance because the World Cup is just two years away, and will be played in the same conditions.” Dhoni’s sole focus is on ICC CT 2017, says childhood coach Banerjee

Harbhajan reckons that it will also be a testing time for all the nations, In bilateral ties, you win some and you lose some. However, tournaments like these literally define the two, three or four years that you may have invested in the process of team building, defining clear-cut roles and formulating team strategies.

He concluded, You know you are competing with the best teams. And, the format of the tournament is such that you have to push your limits and play at the highest level. When you give your best at a global event, the victory cake tastes even sweeter. Needless to say, the number of global events you win define you as a team, or even as a cricketing nation. It becomes the yardstick of sustained excellence. 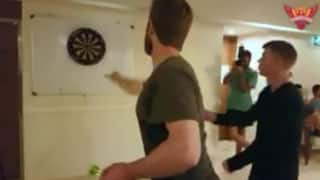