It was rumoured that the Darrell Hair would take up the role of advisory for the upcoming World Cup.

Harbhajn Singh, the Indian off-spinner criticised former ICC umpire of the Emirates elite panel, Darrel Hair for blaming him, Saqlain Mushtaq and Muthiah Muralitharan for chucking and also calling them as the ‘role-models’.

“This is too much. We didn’t cross the limit but now Hair is “crossing the limit”. “Unka dimag theekane nahi (He seems to have gone mad)”, said Harbhajan.

“We were always within the permissible limit. Me and Muralitharan were cleared by the ICC more than once and why didn’t Hair object to my bowling thereafter? Was it because he was feared of losing his job as an ICC umpire? We are not sons-in-law of the ICC,” he added.

Harbhajan was reported for suspect action twice in 1999 at England and 2005 at Perth but was cleared on both aspects after passing the test.

“The present day bowlers are trying to bowl doosra, which was invented by us. It doesn’t necessarily mean they are bending arms more than the limit. The doosras can be bowled without bending the arms too much. The ICC has set a standard for his bowlers and using the latest technology. Hair should stop challenging the technology and better keep his mouth shut.” said Harbhajan.

It was rumoured that the former umpire would take up the role of advisory for the upcoming World Cup next year Down Under. However, it would be interesting to see if ICC could grant him the permission for the same as a disagreement with the ICC led to Hair resign as an umpire. 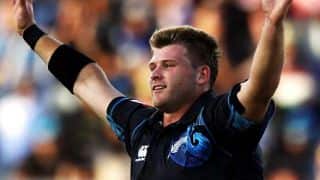