Reports had surfaced in which Harbhajan's was the only name from India to be included in The Hundred draft, leading to speculations about his retirement.

Out-of-favour India cricketer Harbhajan Singh who had presented his name for ‘The Hundred’ draft has taken a U-turn and decided to withdraw his name. Harbhajan, 39, feels he is doing well for Chennai Super Kings and wants to channel his focus on the IPL.

On Friday, news emerged that Harbhajan’s was the only name from India to be included in The Hundred draft, leading to speculations about the offspinner’s retirement.

“For me, Indian Premier League and Chennai Super Kings remain priorities. I have had two good seasons with CSK where we played two finals. So right now, a good third season is what I am looking at,” Harbhajan was quoted as saying by Firstpost.

As per the BCCI’s protocols, no Indian male cricketer can play overseas franchise T20 cricket until and unless he is retired, and Harbhajan clarified he won’t take any step which doesn’t comply with the board. Recently, Harbhajan’s former India and Punjab teammate Yuvraj Singh played the GT20 League in Canada but it was possible because he had announced his retirement in June earlier this year.

“I respect rules laid down by my parent body. I will never flout any BCCI rule. If that means withdrawing my name from the draft, so be it. I will withdraw my name,” said Harbhajan, who is currently part of the commentary team for the ongoing Test series between India and South Africa. “I don’t want to break any rules but I find the concept interesting. As and when, the rules allow me to play, I would definitely like to be a part of it.” 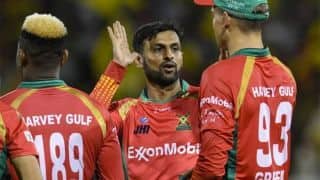