New Delhi: He may have played 103 Tests, but star off-spinner Harbhajan Singh is still uncertain if the new concept of playing day/night Test matches using pink balls will bear fruit in the long run for cricket’s traditional format. In a bid to revive and draw more crowds to the longest format, the International Cricket Council (ICC) introduced the concept of playing day/night Tests, with the first match being played between arch-rivals Australia and New Zealand in November 2015. The 35-year-old, however, is a bit sceptical about the sustainability of the day/night Tests but said there is no harm in giving it a shot. Virat Kohli hailed as ‘legend’ by Harbhajan Singh

“There is no harm in trying the pink ball in day/night Tests. Lets see how it turns out,” Harbhajan said at the launch of mobile sporting application ‘Ballr’ here on Thursday. “I have never played with the pink ball, so I won’t be able to say if it spins more or less. I don’t know if day/night Tests will continue to exist,” he added. The Punjab tweaker, who warmed the bench during India’s limited overs tour to Australia, Asia Cup and the ICC World Twenty20, is however, optimistic of making it to the playing XI very soon. Harbhajan Singh: T20 Cricket is in favour of batsmen at present

“I am waiting to get a chance in the playing XI very soon after missing the matches in Australia, Asia Cup and the World T20. My job is to keep working harder and I am sure the time will come when I will play in all the three formats,” he added. 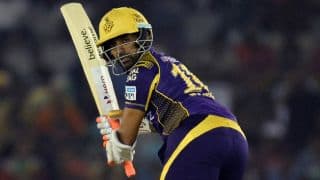