Harbhajan Singh jumps to 2nd position among bowlers with most T20I maidens during India vs UAE, Asia Cup 2

Harbhajan Singh, Indian off-spinner has joined the likes of  Trent Johnston (Ireland) and Ajantha Mendis (Sri Lanka) at the second spot in the list of bowlers with most maidens in Twenty20 internationals. Harbhajan bowled a maiden eighth over of the innings to UAE batsman Shaiman Anwar during India vs UAE, Asia Cup 2016 match. It was also his first over for the innings. Harbhajan has represented India in 28 T20Is which includes the current match and he has bowled five maidens. The bowler with most number of maidens in T20Is is Nuwan Kulasekara of Sri Lanka. Kulasekara has six maidens from 47 matches. Harbhajan’s economy of 6.24 is very good in the shortest version of the game. It is better than Kulasekara’s 7.22. However, the Sri Lankan fast bowler has a better bowling average than Harbhajan. LIVE CRICKET SCORECARD: India vs UAE, Asia Cup T20 2016, Match 9 at Dhaka.

Harbhajan ended with figures of 4-1-11-1, which is incredible for the shortest version of the game. If Harbhajan bowls another maiden, he will join Kulasekara at the top spot. After Kulasekara, Harbhajan, Johnston Mendis; there are eight bowlers who jointly hold the third position among bowlers with most maidens. The bowlers are Mudassar Bukhari, Angelo Mathews, Mohammad Aamer, Mohammad Nabi, Ray Prince, Shahid Afridi and Graeme Swann. All these eight bowlers have bowled four maiden overs in T20Is. Live Blog: India vs UAE, Asia Cup T20 2016 Match 9 at Dhaka

Since Kulasekara and Johnston are pace bowlers; Harbhajan and Mendis are top of the list among spinners with most maidens. Pat Cummins has bowled three maidens. He tops the list among bowlers from Australia with most maidens. Suleiman Benn (West Indies), Mark Gillespie (New Zealand) and Morne Morkel (South Africa) top the list for their respective countries. All of them have bowled three maiden overs each. 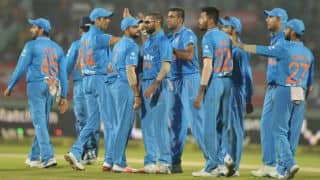