From the start of his career, there is no love lost between Harbhajan and the Australians

Harbhajan Singh has threatened to take legal action against controversial umpire Darrell Hair if the Australian continued to damage his reputation by making provocative comment that youngsters with suspect action have made him a role model.

“I have no time for Darrell Hair’s nonsense. Who the hell is he? Is he bigger than the ICC? But if he tries to damage my reputation or belittle my achievements as an international cricketer with another provocative comment, I will be speaking to BCCI and seek legal action against Hair,” an angry Harbhajan told PTI.

Hair in a recent interview to an Australian daily had said, “”I said it in the late ’90s that if something wasn’t done about it you’d have a generation of chuckers on your hands and now you have. They try to emulate Harbajan Singh and Saqlain Mushtaq and Murali and that’s the problem”.

From the start of his career, there is no love lost between Harbhajan and the Australians but what he disliked about Hair’s comment was his idea of trying to paint everyone with the same brush.

“Just because three for four international bowlers’ action has been found suspect, who gives him (Hair) the right to put everyone in the same bracket. Those, who have problems with their action will undergo corrective measures.

“Well, I have undergone bio-mechanics test at Perth in Australia in 2005 under B Foster as well as in England under Fred Titmus in 1999. ICC has all my reports and this former umpire tries to malign my reputation. It has taken 14 years of rigorous hardwork to attain a level and some random man can’t spoil that,” said the spinner who has 413 Test and 259 ODI wickets for India 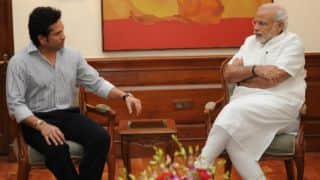