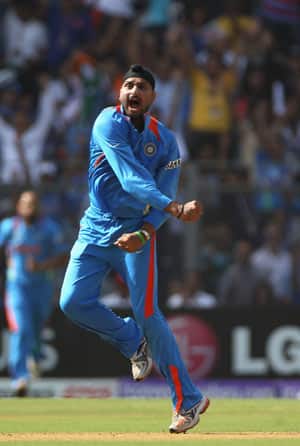 The McDowell’s No. 1 advertisement spoofs Harbhajan Singh’s role in Royal Stag ad campaign that had the selling drive as ‘Make It Large’ Getty Images

The legal notice has been sent by Avtar Kaur, Harbhajan’s mother, through his lawyers, Dewani Advocates & Consultants.

Harbhajan’s lawyers, in the legal notice, have claimed that the commercial mocks the off-spinner, his family and the Sikh community. Advocate Shyam Dewani, one of the lawyers, said that more than the cricketer, his family was upset.

While sending the notice for ad spoof, the off-spinner’s mother Kaur said these kind of advertisements bring “disunity and friction” in the Indian team and can be termed anti-national.

The notice demands that the company publicly apologise to Harbhajan’s family “through widely-read newspapers as well as television channels prominently” apart from removing the advertisement within three days of receiving the notice.

“My client is serving you with the instant notice to give you an opportunity to accept your mistake and make amends. Failing this, we will have no other alternative than to take appropriate legal action including that of filing proceedings for defamation, damages and all such civil as well as criminal actions,” the notice, signed by lawyer Shyam Dewani, said.

Apart from Mallya, the notice has been sent to UB Executive Vice Chairman SR Gupte, President & CFO Ravi Nedungadi, Deputy President Harish Bhat and Executive VP (Corporate Affairs) Nandini Verma. It also seeks a compensation of Rs 1,00,000 to the cricketer’s family towards the cost of the notice.

Harbhajan and Dhoni endorse rival brands. The Indian skipper in an McDowell’s No 1 Platinum advertisement allegedly makes fun of Harbhajan, who had featured in a advertisement for Royal Stag.

Both Royal Stag and McDowell’s No 1 are competing whiskey brands in the market, coming in the same price band. The ads, however, are for the soda brands.

In the Dhoni commercial, the Harbhajan look-alike works in a factory and gets slapped by his father for creating humongous iron balls in a tryst to ‘make it large’ at the ball-bearings workshop.