Fit-again Hardik tonked 20 massive sixes and hit six fours during his blitzkrieg which entertained the crowd present at the DY Patil Stadium on Friday.

After stamping his authority with a scintillating hundred a couple of days back – India all-rounder Hardik Pandya took his brutal hitting to an altogether different level with yet another special knock in the ongoing 16th DY Patil T20 Cup on Friday. Pandya blazed his way to an unbeaten 158 off just 55 balls to help his side Reliance 1 post a mammoth total of 238/4 in the first semifinal against Bharat Petroleum Company Limited.

Returning back from a long injury layoff, the 26-year-old all-rounder gave ample proof to the selectors with his belligerent knock that was studded with 20 huge maximums and six fours. His blitzkrieg at the DY Patil Stadium entertained the crowd and helped his team canter to an easy win by 104 runs after BPCL were all-out for 134 in 18.4 overs.

WATCH Hardik’s madness here, he comes in to bat in the 37th minute:

Eyeing a return to the national fold for the upcoming ODI series vs South Africa, Pandya underlined his red-hot form as he punished the BPCL bowlers with an array of sixes. The BPCL bowlers – Sandeep Sharma (0/37), Sylvester D’Souza (1/56), India all-rounder Shivam Dube (1/40), Parikshit Valsangkar (0/28), Sagar Udeshi (0/45) and Rahul Tripathi (2/32) — were hammered by Pandya.

While bowling too, Hardik took a wicket and conceded six runs in one over. India speedster Bhuvneshwar Kumar also picked up a wicket for Reliance 1.

A few days ago, the Surat-born cricketer had smashed his way to a sensational 105 off just 39 balls in a league game for Reliance One at the RCP at Ghansoli.

Meanwhile, India opener Shikhar Dhawan, who is also on the road to recovery from an injury, managed to score just 3 runs for Reliance 1.

Pandya underwent surgery after suffering a lower-back injury five months ago and has since been on a road to recovery. He could not be fit in time for the New Zealand tour but started bowling at the National Cricket Academy (NCA) in Bengaluru after returning from a check-up in the UK.

On his big-hitting prowess, the dashing all-rounder had said: “If it’s there in my arc I just back myself and go for it. Most of the times, it comes out pretty well. There is no plan that I am going to go out there and smash it.” 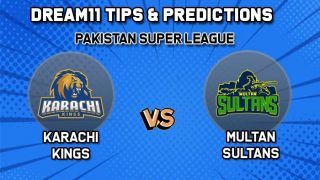