Pakistan all-rounder Haris Sohail completed his second One-Day International (ODI) half-century in 66 balls, the second batsman in the Pakistani ranks to reach the milestone. Pakistan had reached a score of 145 for the loss of five wickets at the end of 36 overs, with Sarfraz Ahmed batting on a score of 13 from 14 balls on the other end. Pakistan needed another 131 runs to 84 balls, with the current pair being the last hope of a victory for the hosts.

New Zealand had earlier finished on a score of 275 for the loss of four wickets at the end of their quota of 50 overs, with Kane Williamson and Ross Taylor scoring 97 and 88 respectively to propel their side to a challenging total. Williamson fell short of scoring his second consecutive century by three runs, though he managed to complete 2,000 ODI runs during his innings. Mohammad Irfan was the pick among the Pakistan bowlers, taking two wickets for 62 runs. 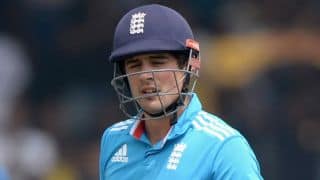 Alastair Cook to be sacked as England captain