Harmeet Singh is declared innocent, but Vidarbha and BCCI continue to make the youngster suffer

Harmeet Singh is declared innocent, but Vidarbha and BCCI continue to make the youngster suffer

Less than a year ago, Harmeet Singh was being talked about as a player to watch out for. His heroic performances during the course of India’s triumphant ICC Under-19 World Cup campaign in Australia prompted a man of Ian Chappell’s stature to remark that the Mumbaikar was ready for international cricket. 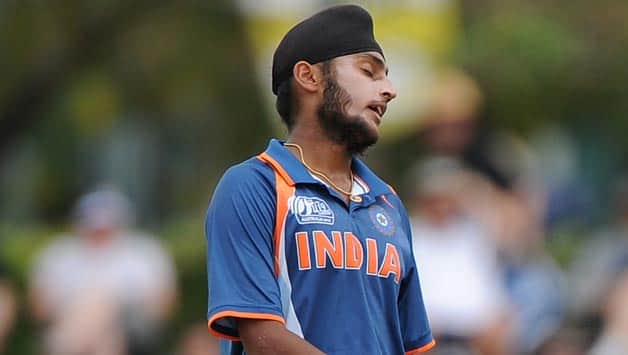 Less than a year ago, Harmeet Singh was being talked about as a player to watch out for. His heroic performances during the course of India’s triumphant ICC Under-19 World Cup campaign in Australia prompted a man of Ian Chappell’s stature to remark that the Mumbaikar was ready for international cricket.

Fast forward to August 2013 and Harmeet’s career hangs in the balance. A witness in the Indian Premier League (IPL) spot-fixing scandal, he has got a clean chit from the Delhi Police. But the Board of Control for Cricket in India (BCCI) is yet to lift its suspension. What’s more, Vidarbha, the team he was to represent in the 2013-14 domestic season, has closed the door on the left-arm spinner.

It is reliably learnt that the Vidarbha Cricket Association, headquartered in Nagpur, decided at its recent AGM that it didn’t want a “problem child” on its player roster. A top VCA official told DNA on the condition of anonymity that there was no way the association would take Harmeet on board. “Even if the BCCI gives him a clean chit, we don’t want him. It’s a policy decision,” the official said. And yes, Harmeet was not allowed to represent the side in any of the pre-season tournaments.

“He is a witness, not an approver. We are ready to clarify with anybody about his innocence. The bookies had approached him once, but he never accepted their offer. It can happen to anybody,” the officer added.

It is also learnt that the Delhi Police has sent a letter to the Board of Control for Cricket in India (BCCI), informing it of Harmeet’s innocence. But the board is waiting for Sawani’s report. Accused Ajit Chandila is still behind bars and Ravi Sawani, head of board’s anti-corruption, has yet to interrogate him.

After the Under-19 World Cup high last year, Harmeet found himself in the Rest of India squad for the Irani Cup tie against Rajasthan. Six months later, he earned a Rajasthan Royals contract. And around the same time, he also decided he wouldn’t wait any longer for a permanent spot in the Mumbai Ranji side. He duly requested the Mumbai Cricket Association (MCA) for a no-objection certificate and switched to Vidarbha.

But a few weeks after the Indian Premier League (IPL) spot-fixing scandal broke out, things took a worrying turn. Harmeet’s name cropped up after a bookie claimed he had tried to influence the 20-year-old, but gave up the idea because Harmeet was “too young”.

A startled Harmeet then requested Sawani to arrange for a meeting with Delhi Police officials. He then boarded the next flight to the capital and cooperated with the investigators. Harmeet was in for a pleasant surprise. The cops told him they knew he was innocent. All they wanted to hear from him was the truth.

Harmeet promptly told them how Chandila introduced him to bookies before the tournament started. Harmeet smelt a rat, but stayed mum. In any case, the bookies had decided against “having him on board”.

A few days later, Harmeet told Sawani whatever he had told the Delhi Police — word by word. The interrogation, conducted at the BCCI headquarters in Mumbai, lasted an hour. In mid-May, Chandila and two others — S Sreesanth and Ankeet Chavan — found themselves in the police net. However, Harmeet chose to remain silent till the whole scandal broke out. The 20-year-old is innocent, but the board is yet to give him a clean chit. Vidarbha don’t want him. Where does he go?

— With inputs from Hakeem Irfan in New Delhi

Ashes 2013: Michael Clarke should bat at or above No 4 to maximise his abilities for Australia