Piedt bagged Man of the Match on debut with eight for 162.

Cricket South Africa (CSA) has congratulated the Proteas and specifically spinner Dane Piedt for winning the one-off Test match against Zimbabwe at the Harare Sports Club with a day to spare.

CSA Chief Executive Haroon Lorgat said that both teams had fought hard to achieve a win, but South Africa had emerged the stronger of the two sides. He also said that it was a proud moment for him to know that South Africa has retained its number one ICC Test ranking.

Commenting specifically about Piedt’s eight wicket debut haul, Lorgat was quoted by Sport24, as saying that it was no mean feat when you consider the calibre of the world-class bowling attack that South Africa has. 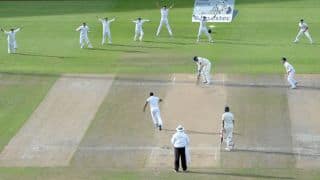