Haryana in command on day two of Ranji QF tie

Haryana in command on day two of Ranji QF tie

Haryana kept themselves in contention for a place in the semi-finals after fighting tooth and nail against Karnataka on an eventful second day of their Ranji Trophy quarterfinal match here today. 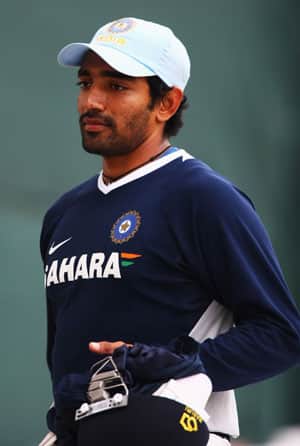 Haryana kept themselves in contention for a place in the semi-finals after fighting tooth and nail against Karnataka on an eventful second day of their Ranji Trophy quarterfinal match here today.

Failing to consolidate on the 152-run partnership produced by their openers, they came back strongly to take three Karnataka second innings wickets at the M Chinnaswamy stadium here.

Chasing Karnataka’s meek total of 151, Haryana made 272 to establish a 121-run lead. Embarrassed by their meek show in the first innings, Karnataka did relatively better to make 122 for three before stumps were drawn for the day.

In effect, Karnataka are one run ahead with seven wickets in hand.

A lot will depend on skipper Ganesh Satish (batting 33) and Amit Verma (batting 1) if Karnataka hope to run up a huge total and then bowl out Haryana cheaply in the fourth innings.

Robin Uthappa made a 46-ball 53 (six fours and one six) before being trapped leg before the wicket by Sachin Rana.

It was a day of riveting cricket as 13 wickets tumbled (one to a run out) on a sporting track.

Haryana, resuming at their overnight 120 for no loss, lost wickets at frequent intervals, helping Karnataka to claw back into the game.

Barely had they had gone past Karnataka’s first innings total of 151, Nitin Saini (69, 13 fours) perished to an ambitious shot off Stuart Binny.

An inspired Binny was to strike again four overs later, having Sunny Singh (3) caught behind by C M Gautam, who pocketed five catches during the eventful first session.

Sitting pretty (152 for no loss) as they were when Saini and Dewan were at the crease, Haryana dramatically lost seven wickets for 36 runs.

There was a virtual march past by Haryana batsmen as medium pacer N C Aiyappa ripped through the middle order with accurate seam bowling.

Dewan, who had watched Aiyappa decimate Haryana’s batting, eventually tickled K P Appanna to Gautam. Dewan’s 101 were embellished with 13 hits to the fence. He lasted 276 minutes at the wicket while consuming 195 balls.

Left-arm spinner K P Appanna struck again off the next delivery to leave the Haryana innings in tatters at 188 for seven.

If Karnataka had hoped to restrict the lead to within 50 runs, they ran into a gutsy combination of Amit Mishra (49) and Mohit Sharma (32) who produced 74 vital runs for the eighth wicket.

Mohit smashed six boundaries before offering off-spinner Sunil Raju his only wicket of the innings.

The Haryana innings folded up moments after Mishra was trapped in front of the wicket by Binny, who was the most successful bowler for Karnataka. (PTI)