Hashim Amla feels he is now more comfortable with T20 format and there is no reason why conventional batsmen like him can't succeed in T20.

New Delhi: Senior South Africa batsman Hashim Amla, who is finally getting to play in the Indian Premier League (IPL), feels he is now more comfortable with T20 format and there is no reason why conventional batsmen like him can’t succeed in the shortest format. Amla was branded as a Test specialist early on in his career but 12 years after making his international debut, he is a valuable asset for the team across all formats. To add to that, his recent run of form in T20s has clearly shown how well he has adjusted to the slam bang version of the game. Hashim Amla to replace Shaun Marsh for Kings XI Punjab in IPL 2016

“There has been a lot of T20 cricket of late and that helps. Yes you do try to hit a few, innovate but the basics remain the same,” said Amla, who joined Kings XI Punjab (KXIP) as a late replacement for Shaun Marsh. He feels the T20 format is not just for power hitters, something well illustrated by Indian star Virat Kohli, who yesterday became the highest-run getter in an IPL season and has scored an unprecedented three hundreds.

“Everyone has a different approach but the basics remain the same. Everyone is trying to get better. You have players who have more power and there are players, who play according to the situation. Power hitting or any other way, you have to get the job done. “Initially [as a conventional batsman] it does take a little bit of time but with so much cricket happening in all formats, it has allowed us the opportunity to adjust as quickly as possible,” explained 33-year-old.

South Africa did not have a memorable World T20 but Amla ended the tournament with couple of half centuries. He has carried that form into his maiden IPL and in the team’s last outing, smashed 96 off 56 balls, albeit in a losing cause. Though his team is already out of the tournament, Amla wants to make the most of his debut IPL season. Was he hurt at not being given the opportunity to play in IPL all these years?

“I am a firm believer that everything happens for a reason. This year was a blessing in disguise. I got to spend a month at home after the World T20. I had always wanted to play in the IPL but there were always other things to do. It was nice to get a month with the family. We [South Africa] have the tour to West Indies coming up. Hopefully, I will get some runs under my belt before the international season begins,” added Amla, who stepped down as Test captain in January to focus more on his game. 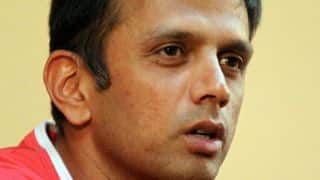