Amla was well supported by the lower middle order while Perera scalped four.

Hashim Amla‘s determined and calm century stood in Sri Lanka‘s way and South Africa were trailing by 187 runs at Tea on Day Three. Dilruwan Perera continued to make inroads and bowling talisman Rangana Hearth also joined the act by picking up JP Duminy’s wicket. Sri Lanka still hold the upper hand and need a monumental partnership from the batsmen at the crease to win this series.

Duminy and Amla started the post lunch session in the exact same manner in which they finished the previous session. Defence was the order of the day and Duminy, in particular took this approach way more seriously than the others. Duminy prodded and blocked and tried to wear the bowlers. Amla on the other hand was moving along nicely towards his century.

Just then, luck favoured the excellent Herath. A slightly over-pitched delivery caught the onrushing Duminy’s pads and debutant wicketkeeper Niroshan Dickwella continued to impress with a smart take and whipping off the bails. Vernon Philander also took the Duminy route and was trying to give as much as of the strike to Amla.

The South African captian had the rub of the green when he was in his nineties. A chipped shot off Herath found the hands of Kaushal Silva at point. Silva dived to his right but put it down. It should have been taken though as it came at a reasonable pace and decent height.

Perera then got his third consecutive four wicket haul off a gem of delivery. Philander was teased by the spinners quite a bit before the dismissal but this time the ball pitched on the middle stump and breached the batsman’s defence. The ball spun deliciously and crashed on to the off-stump.

Amla meanwhile brought up his first century against Sri Lanka and his 22nd overall. It was also his first in the Island Nation. It was his slowest century and was crafted with utmost caution and his archetypical monk-like demeanour.

Dale Steyn was positive in his approach and hit a couple of lusty blows to wipe out the follow-on deficit. Sri Lanka’s lead is still massive and hold all the aces. 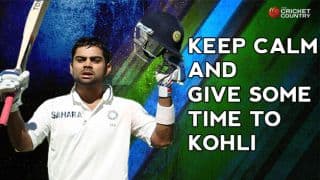