Thanks to Amla and Faf du Plessis, South Africa managed to post 299 for 6 from their stipulated 50 overs. The two batsmen added 145 runs for the second wicket, setting the tone for a big total after being put in to bat first.

Tamim Iqbal, Joe Root on day one and Kane Williamson on day two set the trend of scoring a hundred a day in ICC Champions Trophy 2017. On the third day, South African run-machine Hashim Amla kept up with the trend, going on to score his record 25th ODI hundred. Thanks to his effort, ably assisted by Faf du Plessis , South Africa managed to post 299 for 6 from their stipulated 50 overs against Sri Lanka in their opening Group B fixture. The two batsmen added 145 runs for the second wicket, setting the tone for a big total after being put in to bat first. FULL CRICKET SCORECARD, Sri Lanka vs South Africa Match 3

Sri Lanka won the toss and decided to bowl first in conditions favourable for batting. Even before the game could start, the Asian side had a setback as regular captain Angelo Mathews was ruled out with a calf injury. The past record too was against them, as Sri Lanka had lost last 7 games against South Africa in a row since World Cup 2015.

But Sri Lanka started well, with their pacers keeping things tight. Lasith Malinga, who was playing an ODI almost after two years, was particularly impressive. He mixed up his deliveries well, bringing all his T20 experience to the table. He used the slower ones to good effect, keeping Amla and Quinton de Kock at bay. Suranga Lakmal and Nuwan Pradeep too were impressive, sustaining pressure from the other end. So good were the Sri Lankan pacers upfront that they managed to bowl 40 dot balls in first 10 overs.

Sri Lanka were duly rewarded for the tight, consistent bowling, when Pradeep got the first breakthrough, sending de Kock back. He bowled a fuller length delivery, which slightly moved away from the batsman, took the outside edge and landed safely into a diving Niroshan Dickwella s hands. De Kock scored a subdued 23 off 42 balls and never quite looked going.

Amla and du Plessis then came together, but the situation did not change much. Du Plessis tried to cut loose then, and almost perished, but got a reprieve when Malinga misjudged a sitter at long leg boundary and dropped the catch. He was on 8 then.

This proved costly for the Sri Lankans, as du Plessis and Amla then went on to add 145 runs for the second wicket. Both the batsmen added runs effortlessly, as there were no risky shots being played. Once they got their eyes set in the middle, runs flowed easily from their willow. The fact that Sri Lanka did not have proper back-up resources to their pacers also worked in South Africa s favour, as once Malinga, Pradeep and Lakmal were taken off, Sri Lanka failed to sustain the pressure built early on.

Asela Gunaratne and Seekkuge Prasanna failed to keep a tab on run-scoring. Amla went about his business in his usual nonchalant manner and brought up his 33rd ODI fifty off just 56 balls. From the 18th to the 25th overs, South Africa scored at an average rate of 11 runs per over and then never really gave away the momentum. Du Plessis also brought up his 28th ODI fifty off just 52 balls. He then upped the ante with a few big shots but eventually perished to a stunning catch by Dinesh Chandimal at midwicket. He scored 75 off 70 balls: 67 more runs after being dropped by Malinga.

AB de Villiers then joined Amla but was removed cheaply for 4 by Prasanna. The two quick wickets did not deter Amla though, as he kept going with his monk-like patience, bringing up his record 25th ODI hundred. He took 151 innings to get there, eclipsing Virat Kohli s record of fastest to 25 ODI hundreds in 162 innings.

On the very next ball, Lakmal sent back Miller for 18, getting him caught at the third man. Amla also departed in quick succession, when he was run out trying to steal a second run in the next over.

JP Duminy and Chris Morris then added 45 runs from 32 balls in the final overs before a direct hit from Upul Tharanga sent Morris back. Duminy then gave finishing touches to the South African innings, hitting a fluent 20-ball 38 not out and taking it to the par score in these conditions.

For Sri Lanka, their pacers, especially Pradeep, were the pick of the bowlers. They missed a proper fourth bowler, which cost them dearly as Gunaratne and Prasanna collectively conceded 136 runs from their 20 overs. The Asian side, however, will fancy their chances of chasing down this total after two 300-plus outings in the warm-up games. 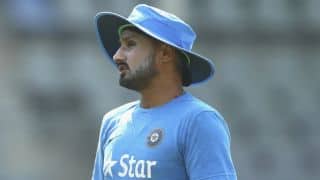 ICC Champions Trophy 2017: India-Pakistan game has got more to do with pressure than anything else, feels Harbhajan Singh