The Hyderabad Cricket Association (HCA) is set to take action against cricketer Ambati Rayudu who last week put out a tweet alleging corruption. The Hyderabad Cricket Association (HCA) is set to take action against cricketer Ambati Rayudu who last week put out a tweet alleging corruption in the state cricket board.

In a tweet addressed to Telangana’s Minister for Industry and Municipal Administration, KT Rama Rao on Saturday, Rayudu had asked claimed of ‘rampant corruption’ prevalent in HCA.

“We will be taking action against Rayudu for bringing the HCA into disrepute. We will be going by the rule book and will follow all the procedures given in the byelaws. As a first step, the CEO will be asked to inquire into the matter and the Apex Council will take necessary action after the report is submitted,” HCA secretary R Vijayanand told The Times of India.

Rayudu had expressed his concerns regarding ‘numerous cases’ against HCA officials being swept under the carpet.

“Hello sir @KTRTRS, I request u to plz look into nd address the rampant corruption prevailing in hca. Hw can Hyderabad be great when it’s cricket team is influenced by money nd corrupt ppl who hav numerous acb cases against them which are being swept under the carpet,” Rayudu wrote.

However, the middle-order batsman has drawn support from several former Hyderabad cricketers and board officials.

“Why should he be punished. What wrong has he done? Is he involved in any corruption? He has just spoken his heart out and the officials should listen to what he says instead of trying to browbeat him,” former Hyderabad offspinner Kawaljeet Singh was quoted as saying by TOI.

Former HCA interim secretary S Venkateswaran said ‘it will be very unfair if the HCA takes action against Rayudu”.

“Everyone knows about the level of corruption in selection matters. Things have been reallt bad since year as there are a lot of complaints from parents and players. Money has taken precedence over talent,” Venkateswaran said. 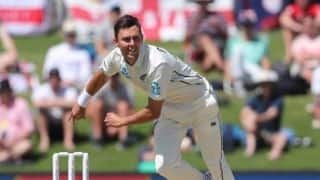 Trent Boult ruled out of Hamilton Test against England