There was some "violation of terms and conditions" by the JSCA.

Ranchi: The Heavy Engineering Corporation (HEC) today said it terminated the land lease agreement with the Jharkhand State Cricket Association (JSCA) on July 4 following the latter’s “violation of terms and conditions”. Even though the JSCA has termed the cited violations as ‘false’, HEC insists that the state association did flout the agreement terms. “Many terms and conditions as stipulated in the agreement are not being followed by JSCA. HEC (lessor) pointed out these lapses on many occasions to JSCA but it never paid any heed to the submissions,” an HEC release said. READ: JSCA approves new rules for domestic matches

Finally, a letter No. 124 dated July 4 this year has been issued terminating the Lease Agreement between HEC Ltd and JSCA, said the release. It added that the JSCA provided “some sketchy” information on July 10 on the matter, after the termination letter was issued. The central PSU last week asked the JSCA to vacate the premises on which the JSCA stadium was founded in 2008, and hand over the premises.

Among the several points the HEC listed in support of its termination of the 30-year lease period, the release alleged that as per the agreement the premises was to be issued only for the purpose specified, but the complex was being used for commercial purpose. The JSCA also violated the conditions of sharing five per cent of the net ticket sales with HEC, displaying HEC’s at prominent places inside and outside the stadium and elevating HEC Chairman-cum-Managing Director as patron of JSCA, the HEC alleged. READ: Kavita Roy to lead Jharkhand senior women’s team

Contacted, JSCA president Amitabh Choudhary termed HEC’s claims as ‘false’ and released a copy of the letter written by the cricket body to HEC CMD in reply to July 4 letter of termination of the lease agreement by the PSU. The JSCA letter termed the HEC’s claims as “not only unwarranted, perverse, based on conjectures and surmises and full of brazen falsehoods but also smacks of malice and oblique motives”.

It also accused the HEC of attempting to ‘browbeat’ the JSCA into accepting its ‘ulterior demands’. The JSCA letter further claimed that the latter had offered to give the land on lease for generating funds as it had faced “acute financial crisis” and that the JSCA had helped it tide over the financial crisis by making payment of the entire lease amount almost at one go.

Stating that the lease was granted under the orders of the Jharkhand High Court, the letter said it was not open to the HEC to unilaterally terminate the agreement. Claiming that three international matches had been held at the JSCA and five per cent of the net sales were remitted to the HEC, the letter said details of sale of tickets as asked by the HEC was an internal accounting matter of JSCA which is duly audited by independent chartered accountant and then approved by its general body.

The letter also stated that the logo of HEC has remained continuously in prominent display at the four gates of the stadium as well as in many locations inside it. The JSCA letter further said the CMD of the HEC was elevated as Patron even before the actual execution of the lease deed and four directors of the HEC were elevated as honorary members. 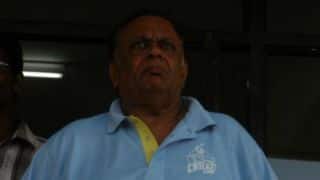