South Africa batsman Heino Kuhn‘s superb run continued as his fourth century in five Royal London One-Day Cup innings helped guide Kent into their first Lord’s final for a decade as they just did enough to beat Worcestershire by 2 wickets on Sunday. Kuhn, all of whose 4 Test appearances for the Proteas came during last year’s tour of England, followed on from where he left off with hundreds against Surrey, Gloucestershire and Nottinghamshire by making 127 in Sunday’s semi-final as Kent closed in on a victory target of 307.

Kuhn was dismissed with visitors Kent still requiring 4 from 3 balls but the very next delivery saw Harry Podmore hit teenage seamer Pat Brown for a boundary to seal a hard-fought win.

It had seemed highly unlikely there would be any last-over drama at all in Worcester when the hosts collapsed to 48 for 4, but wicketkeeper Ben Cox, widely regarded as one of the best glovemen in county cricket, gave the New Road faithful plenty to cheer with the bat in an impressive innings of 122 not out.

He received good support from Brett D’Oliveira — whose South Africa-born grandfather Basil, an England batsman, and father Damian, both played for Worcestershire — who made 78 during a stand worth 140 runs.

Kent too suffered a top-order collapse, slumping to 31 for 3, but Kuhn, playing for Kent under the Kolpak ruling in a move which effectively saw him call time on his South Africa career, reached his latest hundred off 99 balls, including 7 fours and a six.

Kent needed 11 off the last over and Kuhn’s straight six off Brown took them to the brink of victory before, deceived by a slower delivery, he was caught at mid-wicket off the very next ball. Kuhn feared the game was lost, but Podmore made sure he ended up on the winning side.

“To get a century in a semi-final makes it one of the better ones,” Kuhn said afterwards. “I was heartbroken when I got out. It’s just my job to take us through and I was in tears, but luckily the boys pulled it through.”

Kent will play the winners of Monday’s second semi-final between Hampshire and Yorkshire in the June 30 final at Lord’s.

Player of the Match: Heino Kuhn. 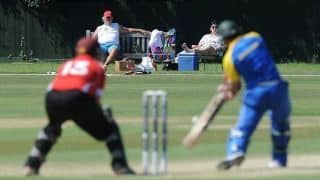