David Miller along with Heinrich Klaasen added 72 runs for the fifth wicket.

South Africa kept their hopes alive of levelling the six-match ODI series against India; winning the fourth game by 5 wickets (DLS method). In a rain-truncated match at Johannesburg, hosts needed 202 from 28 overs, when David Miller and Heinrich Klaasen stepped up their game. The pair swatted India’s spin duo of Kuldeep Yadav and Yuzvendra Chahal to nothingness during their 72-run stand. With this win, South Africa keep their unbeaten record intact in Pink ODIs.

Proteas began their chase in impeccable fashion. Opener Hashim Amla and Aiden Markram displayed no signs of tentativeness against Bhuvneshwar Kumar or Jasprit Bumrah. Amla, in particular, was quick to latch onto anything in his zone. It was in the eight over that Bumrah claimed Markram leg-before for 22 as lightening and rains halted play for the second time in the day.

After a pause of nearly two hours, South Africa s total was revised to 202 from 28 overs. JP Duminy came out ahead of AB de Villiers, much to the surprise of fans. His stay was cut short by Kuldeep Yadav. Duminy missed the flick shot and was rapped on the pads.

De Villiers came out at No.4 with South Africa needing 135 to win. Yadav struck again, this time getting rid of Amla. Amla mistimed his drive and handed a leaping Bhuveshwar Kumar a catch over long off on 33. Kuldeep drew level with Keith Arthurton (12); most wickets as a spinner in a bilateral in South Africa.

David Miller joined de Villiers with South Africa needing 125 to win. De Villiers was in no mood to not pardon his RCB teammate Yuzvendra Chahal, smacking him for back-to-back sixes to overturn momentum in South Africa s favour.

De Villiers stay in the middle was ended by Pandya, after the former hold out to Rohit Sharma standing at square fine leg. Miller was bowled by Chahal, but off a no-ball. It was then that Miller, who took charge of the chase and slammed Pandya for three consecutive boundaries in his fifth over.

The pair of Miller and Heinrich Klaasen came down heavy on Chahal and Kuldeep in back-to-back overs to bring up their 50 runs stand in 30-balls. With the home side needing 28 off 28, Chahal struck gold getting rid of Miller for 29.

It was then Andile Phehlukwayo’s onslaught that diminished India’s hope of a revival. He along with Klaasen added 33 runs for the sixth wicket to take his side to victory. This was Markram’s first win as captain. Klaasen remained unbeaten on 43 from 27 balls, while Phehlukwayo was not out on a 5-ball 23.

India batting first managed 289 runs for the loss of six wickets thanks to Shikhar Dhawan and Virat Kohli. Dhawan scored his 13th ODI hundred, while Kohli recorded his 46th ODI fifty. It was MS Dhoni, who struck an unbeaten 43-ball 42 that salvaged India to that score after a middle-order collapse.

India still lead the series 3-1. The fourth ODI will be played on Tuesday at Port Elizabeth. 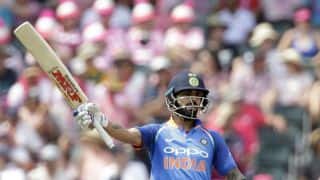 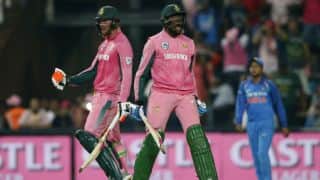