Thirteen years after the match-fixing scandal involving former South African captain Hansie Cronje had rocked the cricket world, Delhi Police Monday filed a charge sheet in the case in which the names of his compatriot cricketers Herschelle Gibbs and Nicky Boje have been left out. 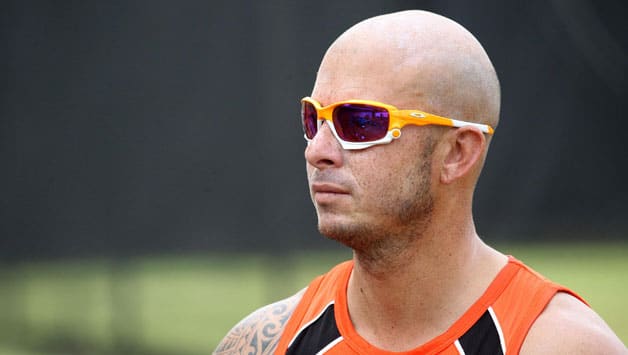 Herschelle Gibbs (above) had accepted before the Kings Commission of Inquiry, constituted in South Africa to probe the match fixing scandal, that he was offered money by Cronje for under performance while Boje had denied his involvement in the saga © Getty Images

Thirteen years after the match-fixing scandal involving former South African captain Hansie Cronje had rocked the cricket world, Delhi Police Monday filed a charge sheet in the case in which the names of his compatriot cricketers Herschelle Gibbs and Nicky Boje have been left out.

Cronje, who was indicted by the Kings Commission of Inquiry in his home country, has been named but proceedings against him are abated in view of his death.

The Crime Branch of Delhi Police has named Cronje, Sanjeev Chawla, Rajesh Kalra, Manmohan Khattar, Sunil Dara alias Bittu and Kishan Kumar, brother of slain T-Series founder Gulshan Kumar, as accused in the case and has chargesheeted them for offences of cheating and criminal conspiracy under the IPC.

The police, in its 93-page charge sheet, said that the proceedings against Cronje, who had died in a plane crash in 2002, be abated while the other five be summoned to face the prosecution in the case.

Gibbs had accepted before the Kings Commission of Inquiry, constituted in South Africa to probe the match fixing scandal, that he was offered money by Cronje for under performance while Boje had denied his involvement in the saga, it said.

It said there is “sufficient evidence” to prove that the accused had entered into a conspiracy to fix matches played here between India and South Africa in February-March 2000.

“From the investigation conducted so far, there is sufficient evidence to prove that the accused persons….had entered into a criminal conspiracy to fix the cricket matches played between India and South Africa from February 16, 2000 to March 20, 2000 in India,” it said.

“The first test match at Mumbai and the first one-day internationals at Cochin were fixed and the same resulted in wrongful gain to the accused and wrongful loss in general to the public at large who had gone believing that they would witness a truly competitive matches in which each player would perform optimally.

“The accused persons have thus committed the offences punishable under sections 420 (cheating)/120-B (criminal conspiracy) of the IPC,” the charge sheet said.

The police, in its charge sheet, said that Kalra, Kumar and Sunil are out on bail in the case while Chawla, the key accused, and Khattar are absconding. It said that Chawla is presently in London.

It said the matches were fixed during the series held here between India and South Africa during February-March 2000.

The police said an extortion case was lodged on November 13, 1999 by businessman Rama Kant Gupta who had alleged that he had received a threatening call from Shaheen Haithely from Dubai and the investigation into the case led them to the match fixing scandal.

It said that surveillance and interception of calls led to cracking of the case and it was revealed during the probe that Kishan Kumar was in touch with Shaheen.

The police, in its charge sheet, said that between March 8, 2000 to March 19, 2000, “it was revealed that accused persons were conspiring to fix the matches in connivance with Cronje.”

Regarding Sanjeev Chawla, it said he was in constant touch with Cronje and had also stayed in the same hotels at the same time where the teams were staying during their visit in India for the cricket series.

It said Chawla had provided a phone, which was purchased by accused Kalra, to Cronje and the frequency of calls between them was “very high” at the time of the matches.

“While Sanjeev Chawla was in touch with Hansie Cronje, frequency of calls between him and his accomplices Kishan Kumar, Rajesh Kalra, Sunil Dara had increased manifold during the matches. This brings out the criminal intentions of the accused persons to fix matches in conspiracy with each other,” the charge sheet said.

Referring to the report of Kings Commission of Inquiry, constituted in South Africa to probe the match-fixing scandal, the police said it revealed that money had changed hands and went to Cronje for fixing cricket matches between India and South Africa.

Referring to the statement given on June 9, 2000 by Boje, another former South African cricketer, before the Kings Commission, the police said he had denied his involvement in the match-fixing scandal.

Regarding Gibbs, the police said that in his statement recorded before the Kings Commission on June 8, 2000, he had admitted that he knew Cassim.

The charge sheet further said Gibbs had told the Commission that Cronje had offered him money for scoring less than 20 runs in the match.

Detailing Cronje’s role, the police said “it is evident that the entire commission of the offence of fixing cricket matches between India and South Africa would not have been possible without the active involvement and planning on the part of the then captain of the South Africa cricket team i.e. Hansie Cronje.”

It also said he had himself confessed about his role and involvement in the case before the Kings Commission.

Regarding Kishan Kumar, the police said he had told the investigators that it was Chawla who had made all arrangements for fixing matches and had also disclosed about the modus operandi of betting and fixing the matches in India.

The charge sheet also said Kishan Kumar had said that Chawla had paid Rs 1.20 crore to Cronje in two instalments of Rs 60 lakh each for fixing the matches.

Regarding Chawla, the charge sheet said he had played the “most vital role” in the commission of crime.

“He [Chawla] not only acted as a conduit between the bookies but also fixed matches in connivance with the South African captain [Cronje],” it said adding statements given by Cronje and Cassim before the Kings Commission clearly point to Chawla’s deep-rooted involvement in the case.

It said Chawla had gone to London from India on March 15, 2000 and never came back and he was operating from the United Kingdom.

It said the forensic reports of the voice of the accused persons have matched with the sample voices and it “nails the guilt of the accused.”

Regarding the absconding accused Chawla and Khattar, the police said if they do not respond to the summonses issued against them by the court, then extradition proceedings may be initiated against them.