A bench of justices S C Dharamadhikari and P D Naik said that BCCI representatives who would attend the cross examination proceedings at the Enforcement Directorate's office must not participate in, or prejudice the proceedings.

Mumbai: The Bombay High Court permitted representatives of the Board of Control for Cricket in India (BCCI) to remain present during the cross examination of some witnesses by former IPL commissioner Lalit Modi in an alleged case of violation of the Foreign Exchange Management Act (FEMA). A bench of justices S C Dharamadhikari and P D Naik, however, said that BCCI representatives who would attend the cross examination proceedings at the Enforcement Directorate’s office must not participate in, or prejudice the proceedings, in any way.

The bench was hearing a plea filed by the BCCI. Its counsel, senior advocate Rafiq Dada, said that since the court, on a previous occasion, had permitted Lalit Modi to cross examine some witnesses, many of whom were previous members of the BCCI, the court must direct the Enforcement Directorate to permit BCCI representatives to remain present as well. Dada also sought permission for the BCCI to cross examine these witnesses as well.

On July 20, 2011, the ED had issued show cause notices to Modi and the BCCI under provisions of FEMA regarding a bank account opened in South Africa by the BCCI ahead of the IPL cricket tournament in 2009. The ED was subsequently permitted by HC to summon, as witnesses, several former BCCI officials including Shashank Manohar, the then president, N Srinivasan, the then secretary, MP Pandove, treasurer, Ratnakar Shetty, CEO, Prasanna Kannan, manager, IPL, and Sunder Raman, COO, IPL, among others.

Last month, another bench led by Justice Dharamadhikari had permitted Modi to cross examine the above witnesses. The cross examination of the above witnesses is scheduled to take place between March 1 and March 13. Dada, thus, approached the high court today saying that since these witnesses might make some comments on the BCCI, the cricket body had a right to remain present in the proceedings.

“We have apprehensions that they might make some adverse comments about the BCCI. Therefore, in order to protect the name of our organisation, we must be permitted to remain present, and to also cross examine them,” Dada said. While the bench permitted BCCI’s representatives to remain present, it said that the organisation’s prayer for cross examination will be decided on a later date.

“However, the BCCI’s representatives, who attend the cross examination proceedings, must keep in mind that they have no permission to participate in the proceedings, to extend any advice or to cause prejudice to the proceedings in any way,” the bench said. 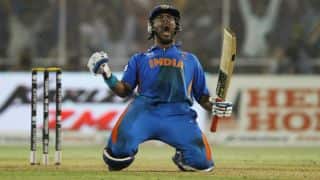