Otago Volts' skipper Brendon McCullum won the toss and elected to field against Highveld Lions in the Group A match of the Champions League T20 2013. 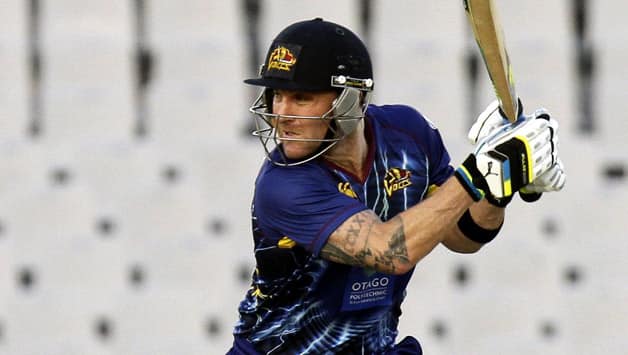 Brendon McCullum smashed a six in the Super Over against Highveld Lions which proved to be decisive as Super Over was tied as well. The final ball result was taken into account © IANS (File Photo)

Jimmy Neesham to bowl the over. It has been his night so far.

Ball 6: A run-out results off the final ball. It is a tie and Otago win this game since McCullum hits the final delivery for a six on the Volts’ innings.

Ball 5: Neesham bowls a full-toss and de Kock scores a single. Two needed off one ball.

Ball 3: Quinton de Kock gets a single. The ball doesn’t pass the mid-off.

Ball 2: Is this game over for Otago? de Kock smashes the ball over square-leg for a six.

Ball 1: The first ball goes over the top of covers from Quinton de Kock. It goes for a four. What a start!

Sohail Tanvir to bowl the Super Over for Highveld Lions

Ball 6: McCullum makes the move and comes down the track and hits Tanvir over long-off for a six.

Ball 5: Neesham hits the yorker towards long-off for a single. Seven have come off five deliveries. Advantage Lions.

Ball 4: A brilliant yorker which McCullum misses. The ball goes past his legs and Neesham sneaks in a bye.

Ball 3: McCullum misses a full-toss. The ball was full and McCullum fails to connect the delivery.

Ball 2: This results in a single. It was a slower ball. Five have come off two deliveries. Good start for the Volts.

Ball 1: Neesham hits the first ball over covers for a boundary. He guessed that Tanvir was going to bowl a slower delivery.

Jamie Neesham has played a blinder. What a carnage this has been from him. Otago were down and out needing 65 off last five overs. The tension was palpable in the Otago camp but the attacking half-century from Neesham ensured that the match went right till the wire.

Otago needed 11 off the final over and they scored 10 which means we have a Super Over. The match ends in a tie.

What a brilliant game of cricket this has been.

Lions are firmly in control of the match. Sixty-five are needed off the five overs. Tahir is the pick of the bowler picking two for 28. Otago lost ten Doeschate, Derek de Brooder and Nathan McCullum in this set of five overs.

Is there a final twist in the tale? Will Lions open their account in the competition?

Otago Volts need 90 runs in the final 10 overs. Lions got the wicket of Rutherford just at the right time. The partnership that was flourishing has been nipped in the bud. Rutherford had hit a six and a boundary off Imran Tahir but the wily leggie got him.

Derek de Brooder is going for his shots. Ryan ten Doeschate has joined him in the middle. Will the run-chase be halted by the Lions or will Otago chase this down easily?

Otago Volts have lost the wickets of Neil Broom and Brendon McCullum. Ethan O’Reilly bowled a crazy second over. He was wayward. Broom tried to take him on and perished offering a simple chance to mid-on. Brendon McCullum is dismissed in the fourth over trying to force the drive but failed to keep the ball down.

Lions are on top at this moment. The required run-rate is nearly nine runs per over. Otago have the batting arsenal to chase down the total. So Lions need to pick wickets regularly to establish their superiority.

Lions have rocketed to 167 for four in 20 overs courtesy of a fine century from Quinton de Kock. The last five overs have yielded 70  runs. This has been a commanding batting performance from de Kock who has helped Lions to register a fine batting performance. A win would ease the nerves of Otago but a loss would give Mumbai a chance albeit narrow.

Lions lost Jean Symes in the set of five overs caught by Derek de Brooder off Neil Wagner. Will Otago chase down the target?

Quinton de Kock gets to his fifty albeit fortuitously. At 42 he hits Nathan McCullum for a six over long-on. Off the next delivery he slog sweeps the ball which seems to go perfectly in the hands of deep square-leg but Nick Beard comes too far ahead and the ball goes to the boundary. McCullum is livid with Beard.

Nick Beard dismisses Temba Bavuma and skipper Alviro Petersen off successive deliveries in the 12th over which puts Otago on top.

Opener de Kock is the key here in the final overs.

Lions lose Rassie van der Dussen in the eighth over and the first ball of James McMillan’s third over. The ball was full and swung in just a tad which beat the Highveld opener. The 44-run first wicket stand has given Lions a good platform. Opener de Kock got into his groove hitting Jimmy Neesham for a couple of boundaries in the sixth over. Van der Dussen hit Wagner for a six over deep mid-wicket but just when he looked to break free he was nipped in the bud.

At this moment Otago are fairly in control of the game. How much will Lions get? Pretorious and Tanvir — the big hitters might come in early.

Highveld Lions start cautiously. Rassie van der Dussan and Quinton de Kock realize that the wicket is doing something hence they are taking their time. The first boundary of the innings comes off the final ball of the third over where de Kock smashes Ian Butler over the top of long-on for the first boundary. Runs are hard to come by as Otago’s fielding is upto the mark.

Otago Volts‘ skipper Brendon McCullum won the toss and elected to field against Highveld Lions in the Group A match of the Champions League T20 2013.

Hello and welcome to the live updates of the Group A match between Otago Volts and Highveld Lions in the Champions League Twenty20 2013. I, Sarang Bhalerao, will be bringing you the momentary updates of this match.

You can watch the video preview here