The Wristband challenge was to spread the message that cricket has no boundaries.

England cricket keep their viewers engaged being indulging in some fun off the field and sharing videos across social media. As the national team is gearing up for the third and final Test versus West Indies, former England skippers (men and women category respectively) Michael Vaughan and Charlotte Edwards accompanied pacer Mark Wood and shorter format opener Sam Billings for a charity cause named NatWest’s Wristband Challenge. The message it carried was ‘cricket has no boundaries.’

In the charity, the English cricketers were trying to sell wristbands in Whitecapel street of East end London. Divided in groups of two, Vaughan assisted Billings whereas Wood was supported by Edwards. The highlight of the challenge was witnessing the funny side of Wood. He thoroughly enjoyed roaming around in search of buyers, did his apparently famous victory horse dance to please the public whereas Billings struggled to get started. Wood, for a short while, also forgot about the task and got indulged in playing cricket with some kids before Edwards got hold of him.

Both Billings and Wood faced some challenges but enjoyed the process. One of Billings’ buyers had a special message for England team as well. “Look after us in the Ashes, alright. Don’t beat us”. Needless to say, must be an Aussie, right?

In the end, Wood prevailed. But do watch the video to witness their fun. 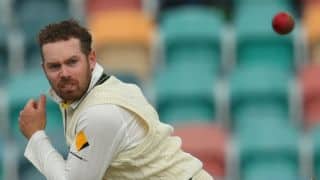