Only a couple of days back, Sehwag had a funny conversation with his friend, mentor, idol and guide Sachin Tendulkar, which entertained millions of the duo s fans.

Former Indian cricketer Virender Sehwag has become a headache for sports writers these days. In fact, he ensures they have a field day every day. The regular ones on Twitter will understand what we are talking about. For those, who are unaware and wondering how come he does so considering he retired long back, we are talking about his hilarious tweets, through which he keeps his fans entertained. Writing day in and day out about his funny birthday wishes, satirical take on contemporary issues and social-message giving posts, the writers may feel the overkill. But his fans earnestly wait for his daily dose of gyaan.

After taking digs at various cricketers, actors and celebrities through his fun and pun filled tweets, Sehwag wished Bollywood actor Vinod Khanna on the occasion of his birthday on Thursday. He took to his Twitter account to post a hilarious tweet, actually a pun using Khanna s surname. He wrote: Today let’s drink Juice of Ganna. To wish Happy Birthday to Vinod Khanna.

Ganna is used for sugarcane in Hindi. He used the pun to make his wish rhyming. With this tweet, Sehwag once again proved that he is truly the undisputed ‘Nawab of Twitter’. His latest target Khanna would have surely loved his tweet, so must have his followers, who got yet another reason to smile. Sehwag added another feather to his cap with the Khanna tweet.

Only a couple of days back, Sehwag had a funny conversation with his friend, mentor, idol and guide Sachin Tendulkar, which entertained millions of the duo s fans. Tendulkar s casusal tweet to congratulate the Indian team on becoming World No. 1 Test team garnered a surprise comment from his devotee Sehwag, and the rest was fun ride. Sehwag will now be seen inside the commentary box during the third Test between India and New Zealand in Indore that starts on Saturday, October 8. He has been a revelation in that role too, entertaining scores of his fans through his funny one-liners. 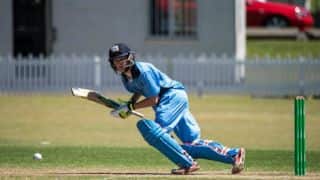