Himansghu Rana did Shubman Gill added 88 for the second wicket, before Praveen Jayawickrama struck again to get rid of Rana for a 79-ball 71.

Riding on fifties from Himanshu Rana and Shubman Gill, India have posted 273 for 8 in their 50 overs against Sri Lanka in the final of the ACC Under-19 Asia Cup 2016 at R Premadasa Stadium at Colombo. India started off well. Their openers Rana and Prithvi Shaw scored at a brisk pace in the early stages and put on 67 for the first wicket at almost run-a-ball pace. Shaw eventually got a top-edge to the deep, handing left-arm spinner Praveen Jayawickrama his first wicket of the match. Rana and Gill then ensured India did not lose momentum. They too scored at a good pace.

Rana did Gill added 88 for the second wicket, before Jayawickrama struck again to get rid of Rana for a 79-ball 71. The ball pitched on middle and crashed into Rana’s off stump after the batsman was looking the drive the ball, playing inside the line. Skipper Abhishek Sharma then joined Gill. The duo did not look to be in a hurry to score quick runs. They perhaps wanted to set the platform for the final 10 overs. As a result, India’s run-rate slipped to under 5. Abhishek holed out in the deep, after the bowlers bogged the batsmen down in the previous overs. Frustration got the better of the captain and he was eventually dismissed for 29 off 44.

Jayawickrama was not done as he returned to remove Gill for 70, eventually finishing with figures 3 for 53 in his 10 overs. After playing a few excellent shots, Salman Khan too perished for 21-ball 26. Sri Lanka also saw the back of Het Patel off the very first delivery after he was run out at the non-striker’s end. There was yet another wicket to fall in the 47th over as Nipun Ransika cleaned up Priyam Garg for 5, making that three wicket off the over for Sri Lanka. From 224 for 3, India had collapsed to 245 for 7 at the end of the 47th over. India have reached a competitive total, but will be disappointed as they have fallen about 15 to 20 runs short of where they would have liked to be. They were largely helped by Kamlesh Nagarkoti’s cameo in the end.

Earlier, India had won the toss and elected t bat first. If India manage to win this match, this will be their third straight Under-19 Asia Cup victory. 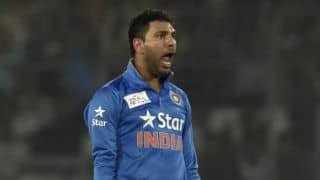