George Bailey is looking in good form, but has a mountain to climb.

The Big Bash League 2014 title is slipping away from the grasps of Hobart Hurricanes, as they still require 87 off the remaining six overs. After the Perth Scorchers put up the huge total of 191 for four, the Hurricanes haven’t been able to turn up for the occasion so far, scoring 105 for the loss of four wickets off the 14 overs  bowled so far.

Their openers, Tim Paine and Ben Dunk failed to give them the launchpad the middle-order would have ideally asked for. Both Paine and Dunk lost their wickets inside the powerplay overs. Jonathan Wells then teamed up with George Bailey to up the scoring rate to at least seven runs an over before he lost his wicket to Brad Hogg.

Hogg also picked up the wicket of big-hitting Travis Birt soon after Wells’s wicket. All the Hurricanes’ hopes are now pinned on Bailey who is currently batting on 49 off 28 balls. 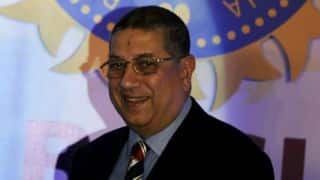