Despite his bowlers taking a pounding from the bats of Kohli and Rohit, Holder appreciated the batting efforts of the team,

On the eve of the first ODI between India and West Indies in Guwahati, captain Jason Holder had emphasized on the need to put 300 runs on the board against India. On Sunday, being asked to bat first, the players answered their captain s call as West Indies put a challenging total of 322 on the board with Shimron Hetmyer leading the way with a third ODI century.

His effort however was overshadowed by a blistering partnership of 246 between two of India s premier ODI batsmen Rohit Sharma and Virat Kohli, both of whom scored centuries to help India gun down the target with 47 deliveries to spare.

Despite his bowlers taking a pounding from the bats of Kohli and Rohit, Holder appreciated the batting efforts of the team, which also saw opener Kieran Powell setting the tone with a half-century at the top followed by crucial lower-order contributions from Devendra Bishoo, Kemar Roach and Holder himself.

“Pleased with the guys for the batting effort. Hetmyer batted exceptionally well. Kieran Powell got us off to a good start and then pretty much everybody chipped in from the lower half,” Holder said after the match. “We started decently with the new ball and it becomes difficult to bowl under lights. Our spinners couldn’t be as effective as they wanted to be. We want to go back and reassess our plans. Probably we should have got 25-30 runs more, but we got a par score. Credit to Kohli and Rohit for taking the game away from us despite the early wicket”

Holder did not hold back in his appreciation for young Hetmyer. The 21-year-old batsman is spoken of highly and regarded as one of West Indies more prominent talents. After the debacle of the Test series, where the batsman could only manage 50 runs from four innings, Holder added he was glad to see Hetmyer come good in the first game of the tournament. Early into his international career, Hetmyer has three centuries from 13 ODIs and averages 45 in the format.

“Really pleased for Hetmyer, especially after the Test series. He showed great character to comeback strongly, he said. “We could have got a bit more had he carried on for five-six more overs, but this is a young team and we will learn. Hopefully we can play a lot better in the second game.

The second ODI between India and West Indies will be played at Vizag on Wednesday. 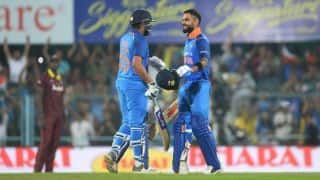