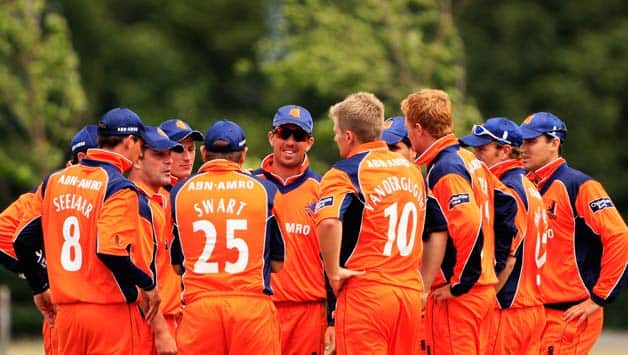 Completing the line-up was the Netherlands which defeated Scotland by eight wickets with 13 balls to spare, following Wesley Barresi’s 75 not out, Ben Cooper’s 40 and Michael Swart’s 30 not out.

With captain Jamie Atkinson watching from the sidelines due to a broken thumb, Hong Kong recovered from 19 for four inside four overs to post 137 for nine. Munir Dar then struck with three for 26 and Haseeb Amjad bagged two for 18 as Hong Kong bowled out PNG for 108 with five balls remaining.

Like Nepal, Hong Kong will be making a maiden appearance at the global stage when it will arrive in Bangladesh in March 2014 where the West Indies will defend its men’s title and Australia will defend its women’s title.

The Netherlands had last played in the 2009 event in the England and had upset the host nation in the tournament opener at the Lord’s.

Today’s results mean that all six qualification spots at the ICC World Twenty20 Bangladesh 2014 have been secured, with the six non-Test playing nations being Afghanistan, Ireland, Hong Kong, Nepal, the Netherlands and the UAE.

Meanwhile, Italy’s Gareth Berg registered the first hat-trick in the history of the competition as the Europe side defeated Namibia by 25 runs to secure ninth position.

In the first of the day’s two broadcast matches, Hong Kong’s Babar Hayat (48), along with Mark Chapman (28 from 24 balls) and Munir Dar (22 from 15 balls) steadied the ship after their side had slipped to 19 for four in 3.5 overs.

After Chapman’s dismissal in the 18th over, Hong Kong lost three more wickets in five balls for two runs to finish at 137 for nine.

In reply, PNG continued to lose wickets at regular intervals, which also prevented it from maintaining the required run-rate. As a result, it needed 63 runs off the final 36 balls, which was always a difficult task. PNG was eventually bowled out for 108 in 19.1 overs with Tony Ura (21) and Geraint Jones (20) being the only notable run-getters.