Government disinterest and lack of sponsorship have resulted in the Hong Kong Sixes being cancelled for good.

Government disinterest and lack of sponsorship have resulted in the Hong Kong Sixes being cancelled for good.

The tournament, organised by Cricket Hong Kong (CHK), has become victim to lack of funds and a crowded cricket calendar with teams preferring to ‘stick to recognised formats’. The Hong Kong Sixes began in 1992 continuing till 1997 before a three-year haul. It restarted in 2001 and continued till 2013 before again being shelved.

It was relaunched in 2017 when South Africa became the champions. “The format was very successful in the 90s and noughties. But given the really complex and congested cricket calendar, we need to stick to recognised formats,” CHK chairman Tony Melloy was quoted as saying by South China Morning Post.

When asked if this is the end of the tournament, Melloy replied, “I personally think so but you can never say never.”

He continued, “It has also been very difficult in the current economic climate to find sponsors to support the event international countries are keen on playing recognised formats and not the Sixes. So, we have cancelled the Sixes and we are letting our stakeholders know.”

Questions are being raised over the future of its T20 league Hong Kong T20 Blitz. The league was launched in 2016 and continued for two more seasons due to financial hurdles. However, three franchise owners have reportedly asked the governing body to work out a way to revive the tournament.

The franchisees have also accused CHK of not keeping them updated on the status but Melloy claims the discussions are going on. “The Blitz was never off the table. I’m actually meeting with owners to have a discussion. It could well be on the table depending on whether we can fit it into the calendar and if there is the financial capability to do so,” he said. 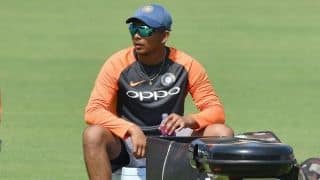