Hong Tour of UAE 2015: Nepal on top against Hong Kong after day 1 at Abu Dhabi

Hong Tour of UAE 2015: Nepal on top against Hong Kong after day 1 at Abu Dhabi

Abu Dhabi saw interesting contest of cricket as Hong Kong faced Nepal for a two day tour match at Sheikh Zayed Stadium. Winning the toss, Hong Kong elected to bat first and started off nicely. Both the openers scored runs and stayed in the crease not giving away their wicket. Opener Anshuman Rath scored a mentionable 42 and retired out. Babar Hayat emerged as the maximum run-scorer for his side remaining unbeaten at 68. Nizakat Khan, who partnered with Hayat thoroughly, missed out on his half century narrowly. Hong Kong declared their innings at 215/4 after playing 60 overs. SCORECARD: Live Cricket Score, Hong Kong vs Nepal 2015, two-day match

Nepal opened their innings with Mahesh Chhetri and Anil Mandal. Chhetri departed quickly after hitting a couple of boundaries but Mandal continued with Sagar Pun. Mandal scored his individual 50 while helped Nepal go past 100. Pun also proved his potentials as he kept on hitting boundaries from the very start of his innings. After the day’s play, Anil Mandal (56 off 104) and Sagar Pan (38 off 90) are in the crease and will bat tomorrow.

Amongst the Nepal bowlers, Basant Regmi was the most successful as he bagged two crucial wickets giving 45 runs. Karan KC helped Regmi to strengthen their bowling attack as he removed a dangerous looking Nizakat Khan as he was batting at 48 and restricted him from scoring his 50. On the other hand, Tanwir Afzal was the only successful bowler for Hong Kong as he dismissed Nepal opener Mahesh Chhetri.

A positive for Nepal from the match is that, despite the absence of Paras Khadka, the most prolific player of their side, Nepal managed to dominate prominently over a stable Hong Kong side ending their day’s play with 106 runs on board. With this, their performance re-establish the team in a better position in the arena of cricket. 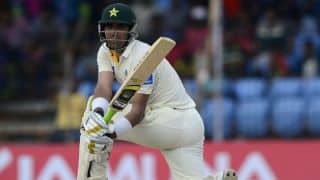