Shakib said he felt ashamed of the entire event and needs support to put things back in order.

After being handed a two-year suspension by the ICC, Shakib-Al-Hasan said he felt ashamed of how the entire event had transformed and that he would require the support of his followers and more to put things back in order and return to cricket a better player. Shakib, 32, handed the punishment from the ICC after Bangladesh’s leading allrounder failed to report corrupt practices which included bookies approaching him for match-fixing during two tournaments – an ODI tri-series in January and the 2019 Indian Premier League.

“Those who have supported me over the years I hope they, the fans, Bangladesh Cricket Board, the government, the journalists will continue to support me in my bad and good time,” Shakib told reporters in Dhaka hours after the ban was announced. “If you continue your support, I am hopeful I will come back to cricket soon. I will be stronger and will perform my responsibilities with more sincerity,” he said.

Shakib will be free to resume international cricket on October 9, 2020, subject to his satisfying the conditions in respect to the suspended part of the sanction. The ban rules him out of the T20 World Cup in Australia with the ICC event taking place between October 18 and 29.

Although shocked at the development, the Bangladesh Cricket Board (BCB) extended its full support and praised Shakib for his coordination with the Anti Corruption Unit of the ICC.

“We are shocked. I don’t think anything could be more shocking than this,” he said. “I have said many times that we don’t have a substitute for two players. As captain, Mashrafe, and as a player, Shakib. Even if we get a substitute for all the players, we won’t have the same for Shakib. So, him not being available is my first shock. Now we are going to play a very important series without him in India.

“I am angry at the same time because he did not inform. Here we need to be very clear that BCB knew nothing… ACSU interacted with only Shakib. ACSU is a separate unit. We came to know just the results. Shakib told me first, 2-3 days back when the strike was withdrawn. We did not know how long he would be banned, Shakib informed us. Shakib is the one who informed us first.

“We all need to be with Shakib. He does not need to be sad. The declaration he gave to work with anti-corruption, he should continue that. We will stay with him. He will get all the support. I hope he will return soon and take our cricket to another level.” 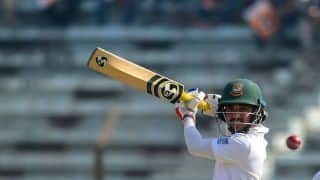