Students from standard X, taking the West Bengal State Board Examination, were up for a pleasant surprise when they appeared for their English paper.

Students from standard X, taking the West Bengal State Board Examination, were up for a pleasant surprise when they appeared for their English paper. They had found a question on Virat Kohli. The students gleefully answered the question on the Indian captain.

We wrote the answer with delight as we never expected a question like this. He is my idol, said Shamim Akhtar, a student of Nabipur Saralabala High School in Murshidabad.

Shreya Ghoshal of Midnapore Mission Girls School in West Midnapore district said, It was a compulsory question (of 10 marks). We had to write a short profile based on the points mentioned in the question paper. But Kohli is so popular that even if points were not given, many could have written pages.

It always feels good to write about a player of Kohli s stature. He is an icon and I was delighted to write his profile, she said.

Popular former Bengal cricketer, Laxi Ratan Shukla, who is now a Trinamool Congress legislator in the assembly, appreciated the boards initiative and spoke on the question.

Besides being an icon, Kohli s life is about dedication, hard work and discipline, which can be an example for students. I appreciate the gesture and I hope in future there will be questions on sporting icons not only in Madhyamik but other board examinations as well, said Shukla.

Around 11 lakhs students across the state are taking the exam. Kohli is amongst the most popular sports personalities in the world. His wedding with Bollywood actor Anushka Sharma was amongst the most covered events in 2017. 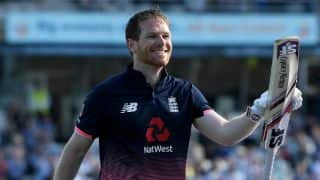