Hong Kong T20 Blitz 2018 got off to a start on a chilly afternoon where the mercury refused to rise over 12 degree Celsius.

Hong Kong T20 Blitz 2018 got off to a good start on a chilly afternoon, as the mercury refused to rise over 12 degree Celsius. Much to the dismay of the handful of City Kaitak supporters, Hung Hom Jaguars defeated the runners-up of the 2017 edition.

The Jaguars won by six wickets. Opener Nizakat Khan’s 48 was the top-score. The bowlers restricted Kaitak to 132 and Hong Kong stars Nizakat and Kinchit Shah (also captaining the side) laid the foundation of the chase with 54-ball 72 run opening stand against a formidable attack that boasted international stars such as Sohail Tanvir, Samuel Badree and Ryad Emrit.

Jaguars did lose three wickets in a span of 17 runs after Kinchit fell, but the target never was much of a bother. Darren Sammy and Johan Botha saw the side through in the 18th over with the former finishing it off with a six over long-on.

2017 Hong Kong T20 Blitz runners-up City Kaitak got off to a shaky start, as they lost their star batter Anshuman Rath to Johan Botha in the first over of the match. Rath played the wrong line and was beaten by spin. The slide continued as Scotland star Kyle Coetzer fell off Hong Kong pacer Kyle Christie in the second over after miscuing a hoick.

From thereon, it was Ben Laughlin show. The Australian pacer is coming fresh off Big Bash League (BBL) where he was instrumental in guiding Adelaide Strikers to their maiden title win. He finished with 16 wickets, second most from the side after Rashid Khan. The 35-year-old priced at INR 30 lakhs could have been a value buy for the IPL sides. He went unsold.

In his very first over, Laughlin induced an inside edge off Ravi Bopara to clean up the Englishman. Hong Kong all-rounder Aizaz Khan steadied the ship as wickets continued to tumble at the other end. Kaitak were 64 for 5 in the 12th over. Hong Kong cricketers Aizaz Khan and Waqas Barkat added 55 from 38 balls. Aizaz was severe on Botha picking him for two sixes and a four.

Laughlin removed the dangerous Aizaz in his second spell. Skipper Ryad Emrit struggled to make it count. Kaitak managed only 13 off their last 16 balls after Aizaz s dismissal. Probably, another 20 could have made the difference.

Botha and Laughlin got two wickets each while Nadeem Ahmed was impressive with his length, finishing with 4-0-19-1.

Player of the Match: Ben Laughlin 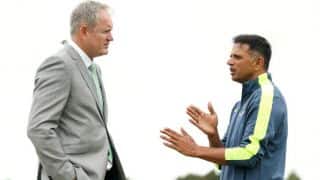