Hyderabad: A cricket betting racket has been busted with the arrest of four people at Hyderabad, police said on Wednesday. Sleuths of the Commissioner’s Task Force arrested T. Satya Prakash Singh while he was accepting bets for the third Test match between India and Sri Lanka which concluded on Tuesday. Three bet collection agents — Amin Madhani, Miran Barde and Sahil Nurani — were also arrested. A set top box, a router, eight mobile phones and cash amounting to Rs.27,000 were seized from the accused. Police said a raid was conducted in an area under the jurisdiction of Langar House police station. Satya Prakash was running the racket from his house in Prashanth Nagar. IPL likely to have 2 new teams in next edition, could be a 10-team affair from 2018

Indian cricket has been mired with controversies relating to match as well as spot-fixing off late, with Chennai Super Kings (CSK) and Rajasthan Royals (RR), two top franchises of the Indian Premier League (IPL), as a result of the verdict by the Supreme Court-appointed Lodha Panel due to allegations of the same nature being leveled against them. It also resulted in the bans of Gurunath Meiyappan and Raj Kundra, associated with CSK and RR respectively. Read more on IPL Verdict

The Rajasthan Royals trio of S Sreesanth, Ankeet Chavan and Ajit Chandila were banned from all forms of cricket by the Board of Control for Cricket in India (BCCI) for their involvement in spot-fixing in the 2013 edition of the IPL. They were however, cleared of their charges in an order by a Delhi court on July 25. READ: Sreesanth, Chandila and Chavan cleared of their charges by Delhi Court 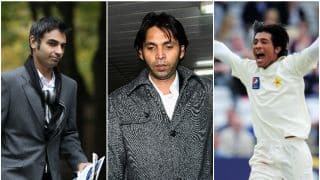