According to the sources, the HCA secretary John Manoj has informed the BCCI that it was ready to host the game even in the absence of the release of funds from the parent body.

With rumours floating around that the Hyderabad Cricket Association (HCA) has backed out from hosting the India-Bangladesh Test in Hyderabad next month, HCA s secretary has refuted any such development, claiming the association is ready to host the historic match even without BCCI s funds. According to the sources, the HCA secretary John Manoj has informed the BCCI that it was ready to host the game even in the absence of the release of funds from the parent body. There were rumours going around that the HCA had shown its unwillingness to host the first-ever Bangladesh Test in India, staring February 8, if funds are not released by the board.

Earlier their were reports that BCCI had Eden Gardens on standby in case HCA is unable to host the Tests. HCA were reportedly in midst of crisis and in process of making amendments as per Lodha Panel’s guidelines. The word going around suggested that the HCA had asked BCCI to release INR 65 lakhs for the conduct of India-Bangladesh Test as per the orders of the SC. But the BCCI did not respond to their communication, which started the confusion. Reports stated that HCA threatened they will not host the game if the amount was not released. However, HCA secretary cleared that the association will go ahead with the match even without the funds released by the board. ALSO READ: Eden Gardens named standby if Hyderabad fail to host India vs Bangladesh Test

According to the sources, with the deadline approaching, HCA decided to raise funds on their own.

They have told the BCCI CEO Rahul Johri categorically that there is no way they are backing out of the Test. Even if the BCCI does not release the funds, they will raise the requisite amount on their own and conduct the Test.

There has not been any official word on it yet. 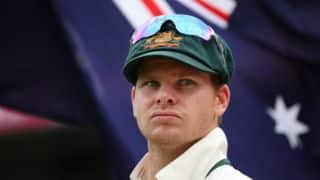 Steven Smith: Hashim Amla is everything one wants in a Test cricketer