Veteran allrounder Shakib Al Hasan, making a comeback, was the Man of the Series, with nine wickets and 115 runs.

Bangladesh recorded their biggest ever and first home series win on Sunday when they thrashed a listless West Indies that lacked stomach for a fight as they won the second Test by an innings and 184 runs inside three days to clinch the two-Test series 2-0 at the Shere Bangla Stadium.

Veteran allrounder Shakib Al Hasan, making a comeback, was the Man of the Series, with nine wickets and 115 runs. “Me and the coaching staff asked for exactly the same, overall, a very good team effort,” Shakib said at the presentation ceremony.

Resuming their overnight score at a lowly 75/5, the visitors lost five quick wickets and were bowled out for 111 in their first essay with Shakib and Mehidy Hasan Miraz sharing 10 wickets. Following on, the Windies were wrapped up for 213 before tea on the third day. Mehidy claimed 5/59, while Taijul returned with figures of 3/40.

“Every batsman who got in, made it count. All the four spinners did really well. We planned and bowled accordingly, especially Mehidy Miraz. Nayeem Hasan bowled really well, the wicket column may not show that though. I cannot ask more from the team. I was too demanding, and everyone stepped up, Shakib, returning after a finger injury kept him out of action for almost two months, said.

Both teams will be involved in a limited-overs series battle with the first of the three ODIs slated to begin on December 9. The Twenty20 International series will begin a week later on December 17.

Windies will look to put up an improved show, while Bangladesh will look to continue their dominance at home. We have some tough challenges coming up, we look forward to them. I had trained only for one or two sessions before the first Test but in the second Test, I felt fully fit, Shakib said. 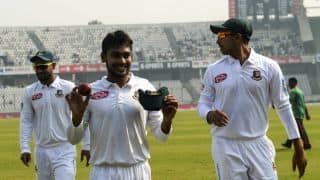